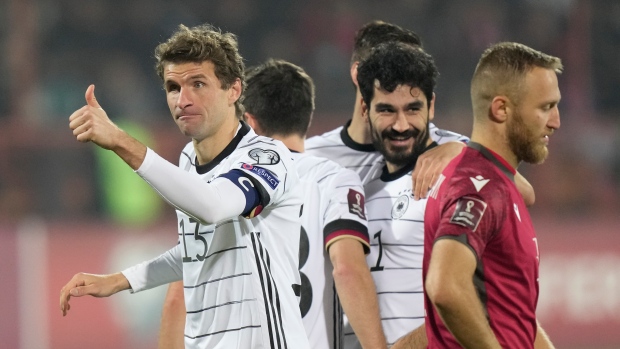 YEREVAN, Armenia (AP) — Hansi Flick extended his winning start as Germany coach to seven games in a 4-1 victory over Armenia in World Cup qualifying Sunday, as North Macedonia reached the playoffs in its bid to play at the World Cup for the first time.

Flick replaced Joachim Löw after Germany's exit to England in the round of 16 at the European Championship and has won all seven games since for the best starting record of any Germany coach.

Under Flick, who won the Champions League with Bayern Munich in 2019-20, Germany has scored 31 goals and conceded just two. His seven games have included two wins each against Armenia and Liechtenstein, and Flick's Germany is yet to face any of the world's top teams.

Kai Havertz got Germany started against Armenia when he turned in a low cross from Jonas Hofmann. Gundogan scored a penalty in first-half stoppage time and another goal off Thomas Müller's assist early in the second half. Henrikh Mkhitaryan pulled one back with a penalty for Armenia, before Hofmann responded with Germany's fourth goal.

North Macedonia beat Iceland 3-1 to stay in contention for the World Cup in a breakout year for the Balkan country coming off its debut European Championship campaign.

North Macedonia needed a win over Iceland to stay ahead of a Romania team which beat Liechtenstein 2-0.

Ezgjan Alioski gave North Macedonia the lead in the seventh minute, but Jon Dagur Thorsteinsson leveled the score for Iceland just after halftime.

Eljif Elmas put North Macedonia back in front soon after, reacting quickly to score on the rebound when Alioski had two shots blocked in quick succession. Elmas scored again late on to extend his team's lead after Iceland had 18-year-old Isak Bergmann Johannesson sent off for two bookings.

North Macedonia will be among the unseeded teams in the March playoffs, when 12 teams will play for three World Cup places.