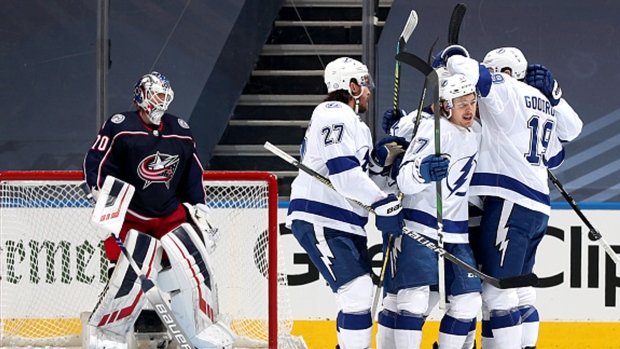 Four games into their series against the Columbus Blue Jackets last year, the Lightning were done. This year, Tampa Bay is up three games to one and close to earning some revenge for that shocking upset.

"I think they've understood the defensive side of the game," observed Jackets captain Nick Foligno when asked what's changed about the Lightning.

During a marathon Game 1 that went into a fifth overtime, Lightning coach Jon Cooper kept reminding his players not to sacrifice defence for offence and they eventually waited out a stubborn Jackets side that saw leading scorer Artemi Panarin depart in free agency last summer.

"We're very cognizant in trying to limit odd-man rushes," said defenceman Ryan McDonagh. "That's been a big focus for us this series and all season."

In Game 4, the Jackets outshot the Lightning 29-22, but Cooper's crew stayed patient and held their nerve in a 2-1 win.

"When another team has us pinned down in our zone, we're doing a good job not panicking there and just buying our time and getting through that," said McDonagh, "and understanding that, yeah, teams will hold us in our zone for a bit and make some things happen, but we can slowly but surely get out of it and get our game going on the offensive side of things. It doesn't really frustrate us."

It's Tampa's turn to frustrate the opponent and a couple of new recruits are leading the way in that department. Gritty wingers Blake Coleman and Barclay Goodrow were acquired via trade from New Jersey and San Jose in February and have given the Lightning a different dimension up front.

"We play a little more of a physical game than we have in years past," noted Tyler Johnson. "We have guys that like to hit, guys that get on the body. You look at the Yanni Gourde line and those guys are always hitting out there and that's something our team has had a little bit in the past, but not as much as this year so that's definitely a difference."

Gourde's line with Coleman and Goodrow produced the two goals in Game 4. Cooper consistently sends them out to start periods and set the tone.

"They're like gnats," the coach said on Monday. "I feel like they're always just buzzing around and as you try to knock them away, they just never leave and they're pests. They put work ethic above everything else. They're selfless players and they don't have an off switch."

Cooper noticed that Coleman and Goodrow seemed to be pressing before the pause, because they badly wanted to make an impact for their new club. But now the pair are more comfortable and doing what the Lightning envisioned when they gave up a couple first-round picks to bring them in.

"This is the reason we got them," said Cooper. "We feel we're a playoff team, it all just comes down to winning in the playoffs and you go down our roster and it's hard to squeeze guys into the 'top six' but that wasn't our need. We needed to be harder to play against and harder years ago used to mean physical and fighting and big and strong and now, today, it means compete, speed and in-your-face hockey and we needed those type of guys. They were circled on the list and [general manager] Julien [BriseBois] and our scouting staff did a great job and we all said, 'What do we need?' And that’s exactly what we needed."

Podium game for the Goodrow-Gourde-Coleman line

Coach Jon Cooper: “They’re like gnats. I feel like they’re always just buzzing around & as you try to knock them away they just never leave. They’re pests ... they don’t have an off switch” pic.twitter.com/BvnA0359jP

Jackets coach John Tortorella hasn't been saying much in his media sessions in the bubble and it seems reporters may be getting the message. Tortorella's briefing on Tuesday started with a question about what the Jackets can take from a solid performance in Game 4.

"It was probably one of our better games of the series," is all the veteran bench boss offered.

The moderator asked if there were any other questions. There were none and Tortorella was gone in less than a minute.

---
Jordan Staal was back on the ice Tuesday afternoon just hours after getting hit hard by Boston's Charlie McAvoy and being forced out of Game 4.

"Good sign that he was out there today," said Hurricanes coach Rod Brind’Amour, who wasn't sure about the status of Carolina's captain for Wednesday's must-win matinee.

Jordan Staal is indeed practicing with the #Canes today.

The Hurricanes desperately needed some good news after a disastrous final 20 minutes on Monday, which saw them get outshot 16-2 and squander a 2-0 lead.

"That was, quite frankly, as ugly a period as I've seen us play," veteran winger Justin Williams said glumly afterwards.

Brind'Amour seemed stunned in the wake of the loss.

"The lack of pushback that we needed is something that I haven't seen out of this group," the coach said in his post-game Zoom session. "I'll take the heat for that. I mean, I needed to have my guys better prepared for that third period ... Taking over as coach, I wanted to make people that support this organization [are] proud of how we play and we've done that for most of the time I've been here and today we didn't and that’s the most disturbing thing for me."

The mood around the team was sombre last night and that's why Brind'Amour opted to hold a full practice on Tuesday.

"We can't win three games tomorrow,” Brind'Amour said. "We got to win one and then see what happens from there. The guys picked up their chin off the ground and came in today and worked hard."

Bruce Cassidy felt McAvoy's hit on Staal, which happened moments before the Bruins tied the game, demoralized the Hurricanes while sending a jolt through the Bruins bench. It also served as a reminder of how the 22-year-old is becoming a more well-rounded force.

"More physical," observed Boston's coach when asked about the defenceman's evolution. "Taking more responsibility in terms of trying to change the flow of the game ... He's much more involved now on the penalty kill, we've given him more responsibility there so now, all of the sudden, he's that all-situation guy."

McAvoy was on the ice for both Hurricanes goals in Game 4, but didn't let that get to him. The third-year pro waited for his chance to make a difference and laid the body on Staal.

"Charlie is a more mature guy," noted Cassidy. "If he has a tough shift, he's able to park it better. I think in the past it bothered him more and he wanted to make amends right away on the next shift and he's done a better job of playing a more balanced game. That's the growth I've seen in him."

Boston has been able to win two of three games with David Pastrnak out of the lineup. The injured right winger participated in Tuesday's practice as he inches toward a return. Prior to Monday's game, Cassidy described Pastrnak’s chances of playing as "50-50 at best."

What are his chances of suiting up in Game 5?

"Better than they were," said Cassidy. "He skated today and made it through practice, did a few battle drills. [It] will depend on how he feels in the morning, if there's residual effect and then we'll make a decision."

Even before that crushing loss to the Bruins, Brind'Amour readily admitted bubble life wasn't easy.

"It's the thing that wasn't talked about enough when the format came out," he said in the hours before Game 4. "I mean, it sounded great just to get back playing but this, to me, was going to be the biggest challenge ... It's a long time to be away. We've been away now three weeks and we've played three playoff games, you know, so guys are feeling it. It's a long road and the team that can hunker down the best and mentally channel all your positive energy to why you're here is the team that will probably be able to hoist the Cup when it's all done."

After Monday's game, Brind'Amour acknowledged that the bubble environment makes it tougher for teams to claw back in a series with players knowing one more loss means a return home.

Even for top teams like the Lightning, who are up in their series, it's a struggle.

"It's a constant battle," said McDonagh, "but the only thing you keep telling yourself is you're not the only one on this team going through that and there is a greater goal out there that we're striving for."