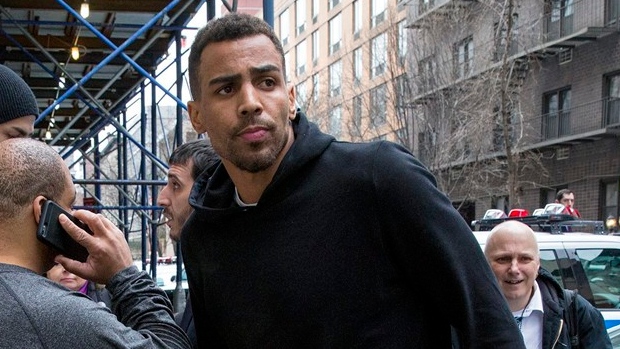 NEW YORK, N.Y. - Atlanta Hawks player Thabo Sefolosha was acquitted Friday of charges stemming from a struggle with police outside a trendy New York City nightclub that left him with a broken leg and ended his NBA season.

A Manhattan jury deliberated less than an hour before finding Sefolosha not guilty of misdemeanour obstructing government administration, disorderly conduct and resisting arrest. He appeared to tear up when he heard the verdict and was later seen shaking hands with some of the jurors as he left court.

"They were on the side of truth and justice today. ... I'm just happy all this is over now and I can put this behind me, knowing my name has been cleared," the 31-year-old Sefolosha told reporters.

Prosecutors had accused the guard-forward, a nine-year veteran from Switzerland, of repeatedly disobeying the orders of officers telling him to leave the area around the club where another NBA player, Chris Copeland, had been stabbed. He testified that he moved off the block at the behest of a vulgar and confrontational officer and was trying to give a beggar a $20 bill when he was grabbed by police and taken to the ground.

"They arrested him," Sefolosha's attorney, Alex Spiro, said in his closing argument. "They broke his leg out of eyeshot or earshot of an unrelated crime scene."

Before the confrontation turned physical, the 6-foot-6 Sefolosha said he challenged the tone of a particularly aggressive officer who was ushering him, former teammate Pero Antic and others. He said he called the 5-foot-7 officer "a midget." Charges against Antic later were dropped.

But prosecutors presented a different theory, arguing Sefolosha acted entitled as he slowly departed the 1Oak nightclub. They said he eventually locked his arms in front of him to make it more difficult for arresting officers to put on handcuffs.

"The police don't get to tell the defendant how to play basketball," an assistant district attorney, Francesca Bartolomey, said in her summation. "The defendant doesn't get to say where the crime scene ends."

Prosecutors had offered Sefolosha a plea deal that would have seen the charges dismissed in exchange for doing one day of community service. But he rejected the offer, saying he wanted to set the record straight.

The decision to testify at trial "wasn't difficult at all," he said. "All I had to do was tell the truth."

The case is the second one involving high-profile athletes accusing New York Police Department officers of wrongdoing this year. On Wednesday, the city agency charged with investigating police misconduct substantiated claims by former tennis pro James Blake that an officer used excessive force in taking him to the ground and wrongly arresting him last month after mistaking him for a fraud suspect.

Spiro, the defence lawyer, has suggested Sefolosha, who is black, was targeted because of his race. He pointed to surveillance video showing the white officer passing Antic, who is white, and others as he demanded Sefolosha to move up the block.

Sefolosha had surgery on his leg and isn't fully healed. He said he continues to undergo rehab and isn't sure he'll be ready to play when the NBA season starts Oct. 27.