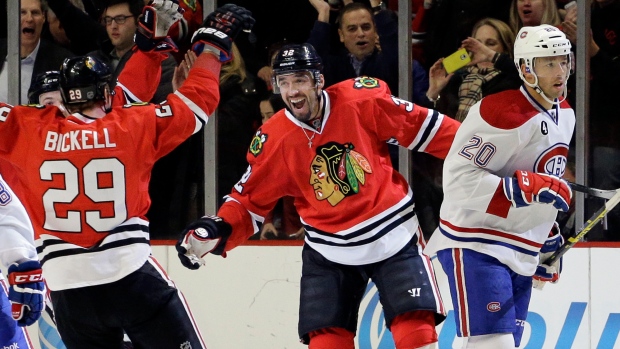 Michal Rozsival is coming back to the Chicago Blackhawks.

The #Blackhawks have agreed to terms with two-time #StanleyCup champion Michal Rozsival on a one-year deal. http://t.co/vk8zN2nVyn

TSN Hockey Insider Pierre LeBrun reports that the base salary is $600,000 with another $200,000 available in bonuses for games played.

The 37-year-old Czech native had agreed to a professional tryout with the team last week. Rozsival, heading into his 15th NHL season, has spent the last three seasons with the Blackhawks with whom he's won two Stanley Cups including this past June's.

Rozsival appeared in 65 games last season for the Blackhawks, scoring a goal and adding 12 assists. Rozsival's playoffs were cut short this past spring when he incurred a fractured ankle in Game 4 of the Western Conference semifinals against the Minnesota Wild. He had an assist in the 10 games he did play in the postseason.

A veteran of 890 career NHL games with Pittsburgh Penguins, New York Rangers, Phoenix Coyotes and Blackhawks, Rozsival has represented the Czech Republic internationally in the 2014 Winter Olympics in Sochi and at two world championships, including the gold-medal winning 2010 team.

Rozsival's best offensive output as a pro came in 2006-07 with the Rangers when he tallied 10 goals and 30 assists.