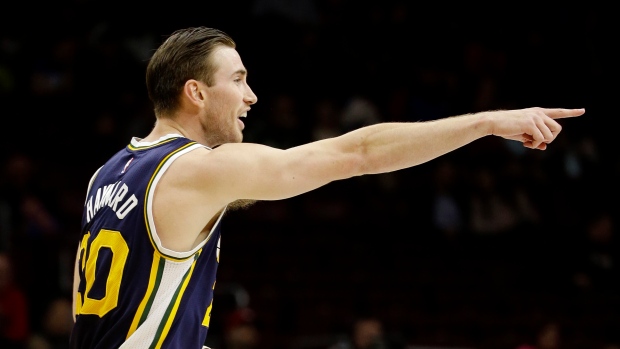 Isaiah Canaan scored 16 points to pace the 76ers, who opened a five-game homestand by dropping their fourth straight and ninth in 10 games. Thomas Robinson added 11 points and 12 rebounds, and Luc Mbah a Moute and Ish Smith scored 14 points apiece for Philadelphia.

Philadelphia took a 47-41 lead early in the second half on JaKarr Sampson's 3-pointer early in the third quarter. But the Jazz got their offence going, scoring 11 of the next 14 points to take a 52-50 lead with 5:31 left in the third period on Favours' layup. Utah finished the scoring in the quarter on Elijah Millsap's bank shot with one minute remaining to take its largest lead of the game to that point, 64-55, into the fourth quarter.

The 76ers shot 5 for 18 from the field in the third quarter.

Utah slowly increased its margin in the fourth quarter, with Hayward's 18-footer with 6:02 left giving the Jazz a 75-63 lead. Their advantage grew to as many as 14 points.

Utah has played its best basketball of the season of late and a big reason has been its defence, as the Jazz entered Friday by holding opponents to an NBA-best 83.0 points per game since the All-Star break. They had no trouble putting the clamps on the 76ers, who entered with the NBA's worst offensive output by averaging 90.7 points.

Isaiah Canaan set career highs with 31 points and eight 3-pointers in Philadelphia's 123-118 overtime loss at Oklahoma City on Wednesday in his seventh game since joining the 76ers in the trade that sent Michael Carter-Williams to Milwaukee.

Trey Burke snapped a string of 10 straight missed 3-pointers by connecting from long range early in the third quarter.

Jazz: Utah signed 6-foot-8 F Jerrelle Benimon to a 10-day contract. Benimon was averaging 19.9 points and 10.6 rebounds for the Idaho Stampede in the D-League. . The Jazz have won five straight over the 76ers, including an 88-71 home win on Dec. 27 earlier this season.

76ers: Robert Covington returned after missing two games due to a bruised right elbow. He struggled to five points, going 1 for 8 from the field and 0 for 4 from the arc. . Former 76ers great Allen Iverson was in attendance. . F Jerami Grant departed with back spasms in the third quarter and did not return. . Philadelphia dropped to 8-22 at home this season.

Jazz: at Brooklyn on Sunday.