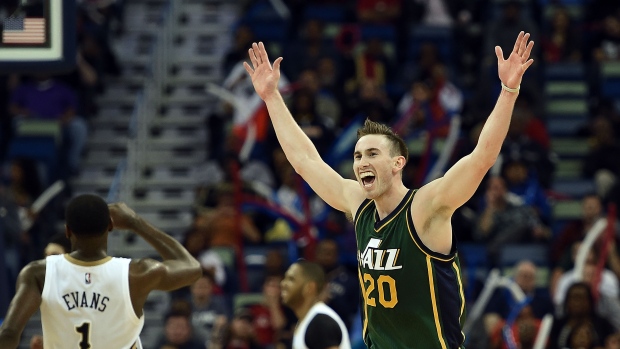 NEW ORLEANS - Gordon Hayward says he looks forward to those moments in a game when Jazz coaches urge him to provide more scoring, and he seems increasingly comfortable in that role.

Hayward scored 25 of his 32 points in the second half, and Utah overcame a 14-point, third-quarter deficit to beat the New Orleans Pelicans 100-96 on Monday night.

It was the second time in two games — both Utah victories — that Gordon hit the 30-point mark, and the seventh time this season.

"It was just one of those things where coaches said, 'Look, we need some offence here,' (and) just gave me some guidance to stay aggressive," Hayward said. "You've got to step up and be able to make some big-time shots and tonight some of those went down."

Derrick Favours scored 18 and Enes Kanter had 14 points and 11 rebounds for Utah, which won its second straight while handing the Pelicans their third loss in four games.

But the Pelicans were unable to overcome the absence of leading scorer and rebounder Anthony Davis, who sprained his right shoulder on Saturday, and Ryan Anderson, who has a sore right elbow.

It didn't help that Gordon turned the ball over six times and Evans five, with eight of their turnovers coming in the second half.

"It was bad execution, throwing the ball away," Pelicans coach Monty Williams said. "We had chances in transition to find an open guy and we didn't."

Elijah Millsap had four steals for Utah, which piled up 11 as a team — including two by Hayward.

"Elijah Millsap was huge for us and the energy he had, especially on Tyreke, was unbelievable," Hayward said. "It really picked us all up."

The Jazz also got a boost from Steve Novak's 12 points — all in the second half on four 3-pointers.

New Orleans had its largest lead when Evans' layup made it 64-50 with 6:42 left in the third quarter.

Utah then outscored New Orleans 21-3 for the rest of the period, with Hayward scoring 12 on two layups, an 18-foot jumper and two 3s.

"Sometimes it takes us getting punched a few times before we figure it out — and we did," Jazz coach Quin Snyder said.

The Jazz's lead grew as large as 78-69 on Novak's 3, but the Pelicans managed to rally back in front, however briefly, when Gordon's consecutive 3-pointers made it 87-86.

Kanter gave Utah the lead right back with a jumper, Hayward added two free throws and Dante Exum hit a jumper to make it 92-87, and the Jazz never relinquished the lead again.

Jazz: Utah outrebounded New Orleans 47-40, with 21 offensive rebounds leading to 30 second-chance points. ... The Jazz improved to 9-18 on the road.

Pelicans: Luke Babbitt scored 15 points. ... New Orleans combined for 17 blocked shots, including five by Omer Asik to tie a career high and five by Dante Cunningham to set a career high. ... The Pelicans led 52-42 at halftime after a 14-0 run spanning five-plus minutes late in the second quarter, highlighted by Gordon's fourth 3 of the half and capped by Evans' driving layup, but New Orleans still lost its third straight home game.

Hayward scored at least 20 points for the eighth time in his past 10 games and finished one point shy of his season high, set against the New York Knicks in November.

"It's a sign of growth, a sign of experience," Hayward said. "I'm shooting the ball a lot better this year and I think a lot of that is because of the experience and also just putting a lot of work in."