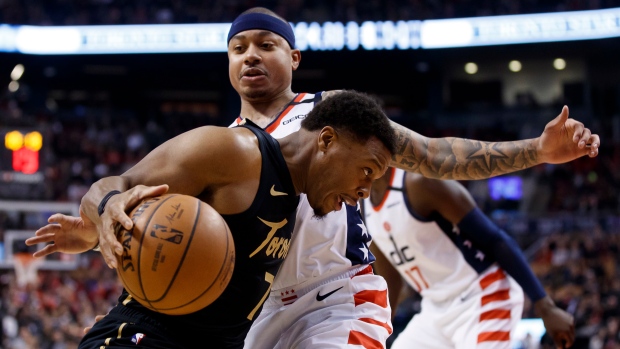 TORONTO – The Raptors opened this season in uncharted waters – the first team in NBA history to try and defend a championship with the reigning Finals MVP on another club’s roster – and nobody really knew what to expect.

Kawhi Leonard was gone and so was Danny Green. Without the means to go out and replace those guys, their considerable workloads would be divvied up amongst the returnees. After another chaotic summer of player movement around the league, Toronto was a forgotten team, once again.

Pre-season projections varied and likely depended on your view of how they’d move forward and which direction they’d choose. Would they sell off their vets to get younger and re-tool, or would they run it back with what they had left?

Assuming they kept the band together and if everything broke the right way, they were going to be competitive, but how good could they be?

Fast-forward three months. With Friday’s 140-111 win over the Washington Wizards, Toronto reached the halfway point of the campaign with a record of 27-14 – just a couple games behind last year’s pace.

Las Vegas had set their pre-season over-under for wins at 46.5, and that was before they were hit with a barrage of injuries that would sink most teams. Instead, they’re on pace for 54 wins. In other words, the results have been better than most would have anticipated, even in their best-case scenario. And this certainly hasn’t looked like their best-case scenario.

Toronto will go into the second half of the campaign having already lost 145 man games to injury – fourth-most in the NBA. Six of the team’s top-seven players have missed 10 or more games, yet they’re 21-9 without at least one of those guys, 14-8 without at least two, 7-5 without at least three and 1-1 without four of them. They’ve had all seven in 11 of 41 games and they’ve only had their full roster available twice all season, and not since Oct. 30.

That should change on Saturday, when Fred VanVleet – who has missed 10 games this season, including the last five with a hamstring strain – is expected to make his return in Minnesota. He’ll re-join a lineup that has recently gotten Pascal Siakam (groin strain), Norman Powell (partially dislocated shoulder) and Marc Gasol (hamstring strain) back from injury.

Of course, Friday’s win wasn’t without another injury scare. Attempting to take a charge late in the first quarter, Lowry bumped knees with Wizards guard Jordan McRae and immediately limped to the locker room, biting his jersey in pain. It’s just been one of those years for Toronto. One step forward, two steps back. Fortunately, Lowry walked it off, got his knee wrapped and was able to return. Crisis averted, for once.

Knock on wood – the Raptors are finally getting healthy, and if their success through adversity in the first half of the season is any indication (and they’re actually able to stay healthy), their best is still to come.

“It’s kinda what we’ve been dealt,” said head coach Nick Nurse. “We deal with what we have and I think there’s a lot of positives to take from it. It hasn’t been easy, but there have been some positives. We’ve seen lots of minutes by lots of guys, different ways. We’ve been forced into a lot of difference defences and lineups, and all kinds of things. We’ve gotta trim some of that off as well and just get down to who we’re going to be. Do we know who we are? Yeah, I think so. I think we’ve got a good team out there, man. We’ve got some guys who play to win and have some experience. If we can continue to be versatile we’ll continue to improve and keep heading in this direction a little bit.”

After winning the NBA’s Most Improved Player award last season and then signing a max contract extension before opening night, Siakam has taken another big leap in his fourth year, just as the team hoped he would when Leonard left. Lowry and Serge Ibaka – who both got hurt on the same night in November and missed 11 and 10 games, respectively – have played some of their best basketball ever, despite being on the wrong side of 30. Just about everybody on the roster has contributed at some point, including pleasant surprises like undrafted rookie Terence Davis, Canadian big man Chris Boucher and free agent addition Rondae Hollis-Jefferson, who didn’t even break camp in the rotation.

However, the constant has been Nurse – an early Coach of the Year candidate. The injuries have kept him on his toes but they’ve also brought out the best in the Raptors’ mad scientist.

Nurse prides himself on his ability and willingness to experiment with different lineups, schemes and coverages, and to adapt to the conditions around him – qualities he’s needed to survive a coaching career that’s taken him around the world and back. From coaching Great Britain to piecing together lineups in the D-League, he’s always had to be flexible.

He hasn’t been perfect. At least some of the team’s recent difficulty holding big leads and closing games has to fall on the coaches. He’s also used some questionable, offensively challenged units of late. Then there’s his affinity for Patrick McCaw, who is a fine player but often looks out of place logging regular rotation minutes. Still, the man has earned the benefit of the doubt. There’s almost always a method to the madness. Every funky lineup or “janky” defensive coverage has its purpose.

It’s hard to imagine a coach better suited to navigate through a minefield of injuries like the Raptors have faced.

“In an NBA season you never know what’s going to happen, there’s a lot of variables,” Powell said. “But I think this team’s done a great job of taking it on the chin, adjusting to it with the injuries, taking advantage of opportunity, playing together, playing hard, and trusting the coaches. I think that’s what you need as a team. Going through an 82-game season, a lot of things are going to happen, but as long as you trust in one another and we figure it out along the way we’ll be good. And I think we’ve been able to do that really well.”

As Nurse stressed before Friday’s game, conditioning is their biggest hurdle at the moment, which isn’t unexpected with so many guys coming back from long layoffs and might also explain why they’ve been running out of gas late in games. While Powell has mostly picked up where he left off and Gasol – a ground-bound player – has looked like himself, you could see the heavy legs wearing Siakam down at points in each of his three games back.

It will take some time before he – and VanVleet, as well as others – get back up to speed, but the last couple games have offered glimpses of what they’re capable of at or close to full strength.

The Raptors shot a season-best 61 per cent in Wednesday’s road win over Oklahoma City, one of the league’s hottest teams. They led by as many as 30 points before the Thunder fought back in the fourth quarter. Their defence, ranked second in the NBA, wasn’t as sharp as usual but their offence was in pre-injury form.

They turned in a two-way gem Friday, albeit against the Wizards, who are 13-28 for a reason. The Raptors totalled 140 points on the night – the most they’ve ever scored in a regulation game. Gasol had 20 points – the most he’s scored as a Raptor – and tied a career-high with six three-pointers (on seven attempts). Powell scored 28 – reaching 20 points for the third time in three games since returning. Davis had 17 of his career-high tying 23 points in the fourth quarter. Meanwhile, Washington committed 28 turnovers.

Toronto, Miami, Indiana and Philadelphia all won on Friday to keep pace in a tight Eastern Conference race. The Bucks have pulled away at the top but only three games separate the five teams behind them. The Raptors currently sit in the middle of them, but only two games behind the second-place Heat.

With the Raptors nearing full health, Nurse indicated he’d like to be more careful with the minutes of his starters, particularly Lowry, who leads the league in that category. Nobody played over 30 minutes in Friday’s decisive win – the first night of a back-to-back – and Lowry logged just 22. Nurse said managing minutes will really become a priority over the last couple months of the season, ahead of the playoffs.

Unlike last year, when Leonard and company spent most of the year looking ahead to the playoffs, the regular season matters to this Raptors team. You want home-court advantage, obviously, and given the significant drop-off after the top-six teams in the East, finishing second and avoiding those top-six in the first round could be huge.

Toronto is just 2-7 against the other top-six teams in the East, although the injury caveat applies. Not only are they getting healthier, but their remaining schedule is among the friendliest in the league. 26 of their final 41 games come against teams with sub-.500 records.

The table is set for them to go on a second-half run.​