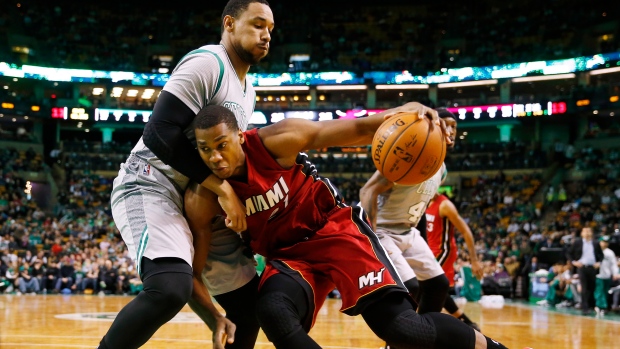 The league made the announcement on Tuesday. Whiteside, who reached out to Olynyk and apologized, will not play Wednesday night when the Heat play host to the Brooklyn Nets — one of the teams they're battling with for an Eastern Conference playoff spot.

Whiteside also apologized to fans and his teammates.

"I feel like I let them down," Whiteside said Tuesday, before the league announced its expected decision. "It can't happen again. We're in a playoff hunt. It was just a terrible decision on my part."

Whiteside elbowed Olynyk in the back of the neck in the third quarter of Boston's 100-90 win over Miami. Whiteside was ejected for the second time in his last four games, and teammates — including Heat star Dwyane Wade — made no effort to hide their disappointment with him afterward.

"Hassan is still a family member, even after last night," Heat coach Erik Spoelstra said. "It's another learning opportunity. We are going to correct it with him. He wants to and he knows that we need him. He needs to be accountable to every other player and staff member in the locker room. He knows how important he is to our play."

The 25-year-old Whiteside is averaging 10.9 points and 9.8 rebounds in 35 games this season for the Heat.

"We're all ready to move forward in a positive way," Spoelstra said. "He's not on an island. We're not turning our back on him."

Whiteside was ejected against Phoenix earlier this month after an altercation with Suns centre Alex Len. The play where he was ejected Monday started when he got upset over a non-call on one of his shots, and he took his frustration out on Olynyk.

"Hassan has a great heart," Spoelstra said. "He's a very competitive person. Now it's about channeling that in the right way. ... When you're a player on a team that's competing for something, your actions impact everybody else in the locker room."