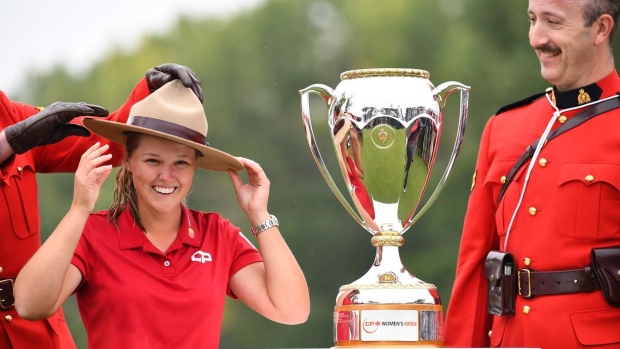 Brooke Henderson made her way to Aurora, Ont., and the Magna GC on Tuesday to help pump up this year’s CP Canadian Women’s Open.

Her clubs, however, did not. They were lost somewhere in the bowels of an airport along with her luggage, meaning the phenom had to skip playing a few holes at the Doug Carrick-designed course and merely scout the layout in a cart.

Nevertheless, Henderson was all smiles as she greeted dignitaries, sponsors and members of the press who scattered shots all over the course before coming in the majestic clubhouse for the formalities.

The first question in the presser was an obvious one: after thrilling the nation a year ago in Regina by becoming the first Canadian to win the tournament in 45 years, what did she have planned for an encore?

“Hopefully come here, get a good strategy the week of,” she stated, “put in some good practise, get the proper rest that I need going into the event and hopefully put some good scores up on the board and put myself in position where I can do something special on Saturday, Sunday.”

Winning the title again will not be easy. The CP Women’s Open, set for Aug. 22-25, will feature a strong field that includes 16 of the top 20 golfers and 90 of the top 100. To win against this field on home soil will require something special.

Then again, Henderson has been doing special things for some time now. This year she notched her eighth and ninth career victories, pushing her past the trio of George Knudson, Sandra Post and Mike Weir as the winningest Canadian golfer on the PGA or LPGA tours.

The record-breaking win came at the Meijer Classic in June and Henderson admitted that on the final hole, where all she needed was a par to re-write the record book, there was a lot of extra pressure.

“I was just trying to make sure I didn’t do anything stupid,” she said, beaming a wide smile at the memory. “For some reason, breaking the record and getting my ninth win on the LPGA Tour which is unreal, I had more nerves than I normally do. I wasn’t sure what was happening but I was able to calm them enough to get the job done.”

The two victories highlight another remarkable season for the Smiths Falls, Ont., product. In addition to the wins, she has five other top-10 finishes, the second-best scoring average on the circuit at 69.67, and is just $1,448 shy of $1 million in earnings on the year.

Her career winnings now total $5.8 million, which is boosted by her plentiful off-course earnings with sponsorships from companies such as CP, MasterCard, Golf Town, PING and Skechers.

She is also the face of the Canadian women’s tournament. After massive crowds in her home region of Ottawa two years ago and a huge turnout in Regina last year, Golf Canada is hoping Henderson’s presence will goose ticket sales in the Greater Toronto Area, where the tournament hasn’t been held since 2001.

Officials said it’s been a bit slow so far, but some of that has been due to the excitement of the Raptors NBA victory smothering the market. With eight weeks to go until the first tee shot, no one is worried and that, in large part, is due to the star of the show.

It can all be somewhat daunting for a 21-year-old woman who has been thrust into the spotlight of Canadian sport. Tournament victories mean congratulatory messages from the prime minister and Wayne Gretzky.

She was named Canadian Female Athlete of the Year last December for the third time in four years. The LPGA Tour has put her front and centre in its new marketing campaign, Drive On. Throngs of young girls, dressed in PING visors – nicknamed Brooke-alikes – follow her every move. And there’s also the Brooke Brigade, which encompasses girls, boys, men and women, that shows up at every tournament. It’s her version of Arnie’s Army.

“A little bit,” she said, when asked if it all can be overwhelming. “It’s sort of hard to believe sometimes. I’m just trying to be a better person and a better golfer every single day. I try to push myself to be the best that I can be.”

What’s evident, though, is that Henderson has accepted her position and is embracing it. Just as her game on the course has continued to improve, so have her skills in front of the microphone.

Through interview after interview on Tuesday, she never seemed flustered, or short, or tired of answering the same questions. She laughed and charmed her interviewers, keeping her life in perspective.

She provided honest responses, shared her success with her family, especially sister/caddie Brittany, and was humble in every way. (Her only remaining fear, apparently, is making speeches solo and for her opening statement at the press conference, she requested someone to ask her questions instead).

“I’m in a really amazing place right now,” she admitted, “and I just hope I can keep it going,”

Now, if only she could find her clubs.