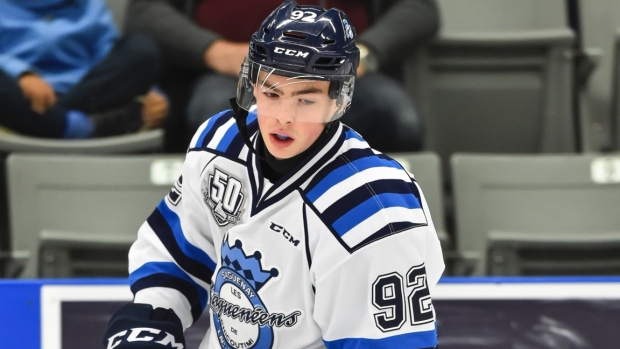 Hendrix Lapierre possesses the talent to be a top pick in the next National Hockey League draft, but he hasn't shown it in a while.

Lapierre's season was derailed due to injury, so when NHL teams call the Chicoutimi Sagueneens centre the first question is always about his health.

​"They're wo​rried," Lapierre acknowledged in a Skype interview from his family home in Gatineau, Que. "Obviously, when you're drafting you don't want to waste a pick, so I understand. But I tell them, 'I feel so good and I'll be back stronger than ever next year.'"

Concussion concerns have swirled​ around the 18-year-old. He missed a mo​nth with a concussion in February of last season. He then appeared to sustain another one on Oct. 23 this season. He returned in November, playing six more games before being diagnosed with yet another concussion. He hasn't played since Nov. 21.

Symptoms persisted until mid-February when Lapierre realized his headaches were only happening for a brief time every morning. His agent and family looked to get more information.

Lapierre went for an MRI and X-ray and sought out three different specialists. The diagnosis was consistent from all three: Lapierre was actually dealing with a spinal injury. A few of his vertebrae were "twisted and stuck," Lapierre said. He worked with a physiotherapist and chiropractor and the headaches soon disappeared.

Considering how hard it was to move the vertebrae, the belief from the specialists, Lapierre says, is the injury was sustained way back in February 2019 at the same time when he was first concussed.

While the experts can't be 100 per cent certain, it's possible that Lapierre only sustained one concussion and the other problems this season were the direct result of the vertebrae issue being re-aggravated.

"Being diagnosed with three concussions in 10 months was worrying for me, my family and my future in hockey," Lapierre admits. "The new diagnosis is a really big relief and I feel confident going into next season that I'll be able to have success. I've strengthened my neck a lot."

Lapierre worked hard to get back into game shape and was close to returning when the season was postponed due to the coronavirus outbreak on March 12. He has since been medically cleared to play.

"The plan was for me to play the last two or three games of the season and get ready for the playoffs."

The Canadian Hockey League season was eventually cancelled, meaning Lapierre didn't get a chance to salvage his draft campaign. He finished with two goals and 17 points in 19 games. Even before the injuries, he wasn't thrilled with his performance.

"I didn't have the start to the season that I was expecting," he said. "Maybe I was putting too much pressure on myself. I have no idea why, to be honest. It's really tough to say."

Despite some trying times, Lapierre's potential is impossible to ignore. After being the first-overall pick in the 2018 Quebec Major Junior Hockey League draft, he posted 45 points in 48 games last season, winning the Michel Bergeron Trophy as the league's offensive rookie of the year. Last summer, he dominated at the Hlinka Gretzky Cup, producing 11 points in five games and helping Team Canada win the silver medal.

He makes it 3-0 CAN over SUI in the first frame pic.twitter.com/EhExqsneBF

TSN director of scouting Craig Button still has Lapierre ranked No. 10 on his latest list. And Lapierre was still among the three nominees for the Mike Bossy Trophy, which is given to the Quebec league's top professional prospect.

"Lapierre is the wild card of this draft," Button said. "I should probably have him higher based on his potential, because I think he's a top-five player if he can return to full health. He's the best two-way player in the draft."

When does Lapierre expect to be picked?

"That's a tough question," he said. "The 2020 draft is a pretty good one, a special one ... I hope to go in the first round, maybe, but after my performance I don't know. As of right now, my focus is not on the draft, it's to get back stronger and faster again and make sure everything is alright for next year and the draft will be a nice reward to that. I feel like I could go anywhere. I can't say a number."

Cole Perfetti also starred for Canada at the Hlinka Gretzky Cup and the Saginaw Spirit forward parlayed that into a fantastic Ontario Hockey League season. Button has Perfetti ranked No. 4. Does Lapierre feel like, with his talent, that's the section of the draft he belongs in?

"I've always been a player that's confident in his abilities, so I have a tendency to say, 'Yes.' I played well at the Hlinka and that was a great performance for me, and it brought me a lot of confidence. Obviously, it wasn't the draft year I was expecting with the Sagueneens, but I feel like when I play at my full potential and when I play at my best I can be with those guys."

NHL Central Scouting released its final rankings on Wednesday with Perfetti at No. 5 and Lapierre at No. 13 among North American skaters.

Lapierre is quick to note that he's made improvements despite not playing much. Specifically, he's aiming to become a more dangerous goal scorer after potting just a pair this season.

"For the last four or five months I've been on the ice basically every day," he said. "Not since the outbreak, but before that I was on the ice and working on my shot or working on tight-area skills with our skills coach. Right now, I'm shooting pucks outside and I feel like my shot has gotten a lot better. I just have a good feel with it. We changed my technique a bit. I can't wait to try it out. Honestly, I miss the game so much."

“If I can bring a little Kuznetsov with a mix of Barkov, could be a nice recipe...”#NHLDraft prospect Hendrix Lapierre spoke with Mark Masters about his recovery from an injury that derailed his season and which NHLer he models his game after: https://t.co/3gGgPHlDbD #TSNHockey pic.twitter.com/DDY2wrbrqk

Lapierre considers Washington's Evgeny Kuznetsov to be the NHLer closest to his game style. He's also trying to mimic the two-way play of Florida's Aleksander Barkov.

"I watched him maybe 10 or 15 times this year, he was so good. It’s incredible,” Lapierre said. “He's big with a long reach so I feel like if I can bring a little Kuznetsov with a mix of Barkov that could be a nice recipe."

It's a recipe that could lead to a lot of NHL success for whichever team takes a chance on the 6-foot, 181-pound centre.

​"I don't usually put motivational statements out on Instagram, but I was on there one night and thinking about the season and I saw a motivational website, I saw a few sentences and I felt like this one was representative of my situation. Usually I just put pictures up, but I wanted to put that up there just for myself and so everyone knows I'll be back." ​