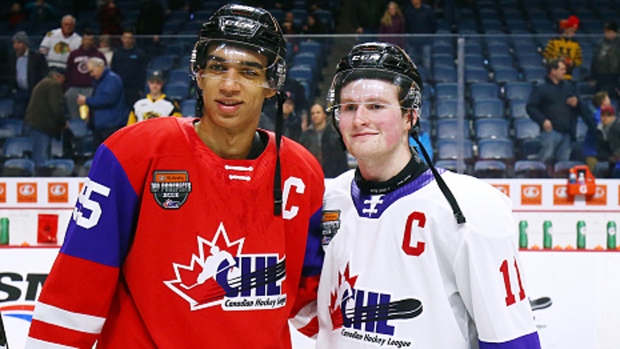 The Detroit Red Wings and Montreal Canadiens are the big winners and the Ottawa Senators the big losers in the TSN Simulated Draft Lottery on Tankathon.com.

First seed Detroit won the lottery and Montreal moved up from eighth to second, while Ottawa, which held the second and third seeds, were relegated to picking fourth and fifth overall when TSN activated the simulated lottery.

The good news for Senators’ fans is that if they don’t like that result, they can just do it again (and again) on Tankathon.com until they get a result they like.

The actual draft lottery was scheduled for today, Thursday, April 9, but it was postponed in the wake of the NHL putting the season on pause. So, in lieu of the NHL pressing its ping pong ball machine into action, TSN pressed the lottery button on Tankathon.com.

TSN Director of Scouting Craig Button made selections for each team in the simulated top 15.

Button has Detroit doing the expected, selecting consensus No. 1 prospect Alexis Lafreniere. The Rimouski left winger was the 2020 World Junior Championship MVP and is expected to be the first player since Sidney Crosby to repeat as CHL Player of the Year.

“I’m a leader,” Lafreniere said on a conference call Wednesday, announcing him as NHL Central Scouting’s No. 1  rated North American skating prospect. “I always want to win when the game is on the line. I can make a difference and that is a strong asset that I have.”

The Canadiens can only hope they are as lucky in the real lottery as the simulated one because it would give them the chance to fill a decades-long hole in the lineup: a big scoring centre. Button has Montreal taking Sudbury’s Quinton Byfield, saying:  “How would the next Evgeni Malkin look in a Montreal Canadiens’ sweater?”

“That’s just an honour to be compared to that guy,” Byfield said on the conference call. “He’s soon to be a Hall of Famer, so I definitely watch as much Pittsburgh games as possible just to see what he does.”

With the third-overall selection, Button chose Erie right defenceman Jamie Drysdale for New Jersey. Button says the consensus top-ranked blueliner could be this generation’s Scott Niedermeyer, who, coincidentally, was chosen third overall by New Jersey in 1991.

Button added that Ottawa may have the weakest centre ice position in the league – so getting Rossi to go along with Stutzle would go a long way to solving a major problem.

Winnipeg, the only other Canadian team currently in a lottery position, entered and exited the simulated lottery in exactly the same position: 12th overall. Button projected the Jets taking USA U-18 left defenceman Jake Sanderson at that slot.

Sanderson finished the season as Central Scouting’s No. 4-ranked North American skater, behind only Lafreniere, Byfield and Drysdale.

Here are all 15 of Button’s mock draft selections.