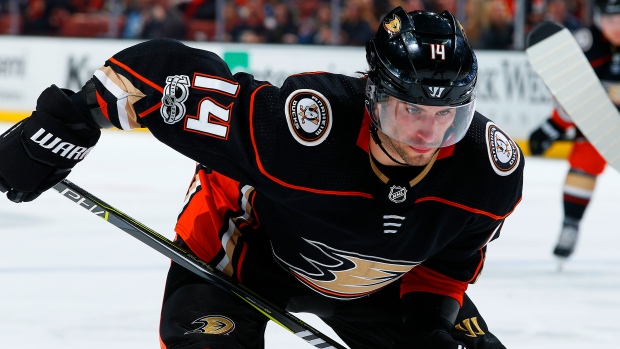 The winds of change are blowing in Anaheim. For opportunistic front offices, that presents an opportunity to acquire serious talent on the trade market this summer.

Bob Murray’s Ducks are in a fascinating situation. They are the only team left without a head coach – all signs indicate Dallas Eakins is the next man in line but nothing has materialized there quite yet. But the coaching hire, whenever it occurs, won’t be the only transition the team goes through in the coming months. The front office is also signaling an intention to clear some cap space and clean up the roster while remaining competitive heading into the 2019-20 season. That is a tricky tightrope to walk, but we’ve seen Murray do it before.

Perry is obviously a major name to float on the trade market – it’s not often that guys with Perry’s scoring history and individual hardware ever become available, but Perry’s situation is a bit unique. The forces countering Perry’s incredibly impressive resume include his age and mileage (he’s 34 years old and has played more 1,100 games), a bad injury and long recovery (Perry is fresh off of meniscus and MCL injuries and associated surgeries), and a penalizing cap impact of $8.6-million in each of the next two seasons.

General managers across the league are surely weighing the pros and cons of bringing Perry into the fold. While I think his name will continue to draw attention, he’s not even the most interesting trade candidate on his own team. That belongs to the aforementioned Henrique – the capable middle-six forward who excels at both ends of the ice.

Henrique, now 29, is signed through his age 33 season at a $5.8-million cap hit. That’s about 6.5 per cent of the cap over the remainder of the contract, assuming 3 per cent league growth year-over-year. And even on a shockingly bad Anaheim team last year, Henrique still produced quite well. Playing with the likes of Nick Ritchie and Ondrej Kase, Henrique managed 18 goals and 24 assists. He led the team in power-play scoring and was a regular feature – along with the likes of Andrew Cogliano – on the Ducks’ penalty kill.

The most encouraging part of Henrique’s 2018-19 season is that it looked quite similar to his prior seasons, and that’s generally been a good thing. Over the last five seasons, for example, Henrique has averaged 23 goals and 23 assists for every 82 games played. Add that to his versatility across game states and you have a predictably productive player.

But point totals alone really don’t do a great job in telling us how much value a player has created, particularly so for a player whose game is built just as much on defence as it is on offence. To get a feel for what a player like Henrique brings to the table, we must be able to evaluate his contributions on both ends of the ice, and then correlate that against his peers around the league.

To get a better picture of where Henrique’s game is right now and who his peers are around the league, I will utilize Evolving Hockey’s goals above replacement model, which measures the total goals a player adds to his team relative to a replacement level player. (This includes both offensive and defensive contributions and isn’t impacted by wild swings in teammate goaltending performance.) From there, we can create similarity and dissimilarity scores to other players around the league to get a qualitative sense of who Henrique is right now.

The below graph shows Henrique’s peers based on usage rates and performance from 2017-19. I have also included a side table showing some of Henrique’s most dissimilar peers, though that is more educational than anything: 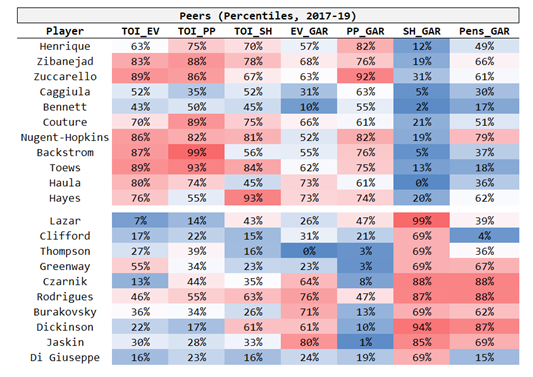 You can look at Henrique relative to his peers on the top row and get a quick understanding of where he does and doesn’t provide value. His usage rates consistently compare to that of a middle-six forward (probably closer to regular second-line duties), and he’s recently an above average 5-on-5 player and a tremendous power-play weapon.

On the other side of the spectrum, his measurables don’t show him as a value-added penalty killer (Anaheim has actually been better with him off of the ice despite his usage), and he’s around break-even in the penalty department.

Naturally you can see his peers generally have the same makeup. The players who aggressively correlate with Henrique’s play include New York’s Mika Zibanejad and Dallas’ Mats Zuccarello. Further down the list you have an interesting mix of low-end comparables (e.g. Sam Bennett in Calgary) and high-end comparables (e.g. Nicklas Backstrom in Washington), but generally speaking, you get a pretty nice and clean range in which to assess Henrique as a player and the type of fit he would be in your lineup.

The point I circle back to here is that, outside of maybe the aforementioned Bennett and Chicago’s Drake Caggiula, most of these players are either impact or high-impact players in today’s NHL. I think Anaheim thought similarly of Henrique when he was acquired last year for a package that included Sami Vatanen, a quality top-four defender.

This is where the job of rival general managers gets quite tricky. It seems possible, if not likely, that Henrique is being undervalued right now. The team he played on last year was abysmal and there’s a good chance that’s clouding individual player evaluations.

If Henrique can be had for a reasonable cost, considering his comparables and his consistent production over time, he is a very desirable trade target for teams with even moderate cap space heading into the summer. He may be just coming out of his prime playing years, but he’s also still on the right side of 30 and recent play suggests he is still a difference maker in most phases of the game.