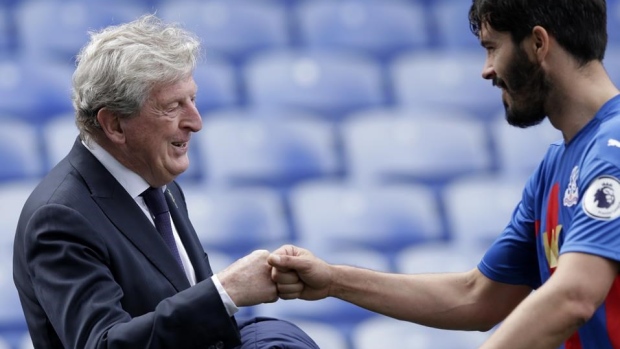 LONDON — Roy Hodgson, the Premier League’s oldest manager at 73, is leaving his role at Crystal Palace at the end of the season after four years at the club.

Hodgson did not disclose what the next step in his career would be, but said Tuesday he is ready to stop being a “full-time manager.”

“After more than 45 years of coaching, I have decided that the time is right for me to step away from the rigors of top-flight Premier League football,” the much-traveled Hodgson said.

The former England coach’s last game in charge of Palace, which is safe from relegation, will be against Liverpool — one of his many old clubs — at Anfield on Sunday.

“I have had so much support from my wife and family throughout my career and I have been contemplating this decision for some time," Hodgson said, “and now I believe the time is right to consider them and to see what the future holds for me.”

Hodgson joined Palace, the team he supported as a child, in September 2017 for his first job since ending his spell as England coach. The south London club was in last place in the league at the time after losing all four of its opening games that season under Frank de Boer, but Hodgson managed to keep Palace in England's lucrative top division and again in the following three seasons.

“His record with us simply cannot be overstated," Palace chairman Steve Parish said. "He is the only Palace manager to secure four years in the Premier League and he has helped give us stability in the most turbulent of times.

“We will be forever grateful for his immense contribution.”

Hodgson is one of the world's most respected coaches, having worked at clubs in Sweden, Switzerland, Italy, Denmark and Norway along with Liverpool, Blackburn, Fulham and West Bromwich Albion in the Premier League.

He has also coached the national teams of Switzerland, the United Arab Emirates and Finland.

Hodgson is the oldest person to manage a Premier League team. Only three others — the late Bobby Robson, Alex Ferguson and Neil Warnock — have managed Premier League clubs in their 70s.