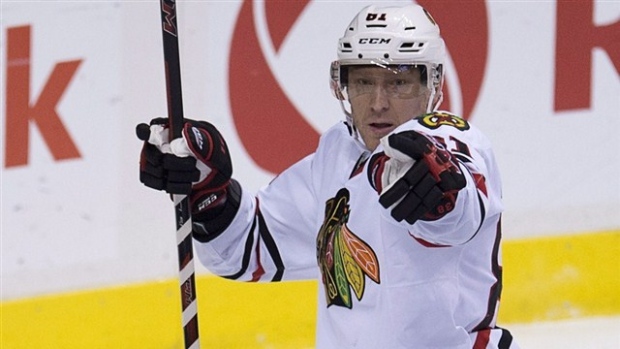 OTTAWA - Chicago Blackhawks forward Marian Hossa had a memorable night in the city where his NHL career started.

Hossa had a goal and an assist in the Blackhawks' 5-4 shootout win over the Senators on Thursday night in Ottawa, reaching two special milestones where he began his career back in 1997.

Hossa's goal at 13:50 of the third period was his 1,000th career point and it came in his 1,100th game in the NHL. The veteran forward started his career with the Senators, moved on to Atlanta, Pittsburgh and then Detroit before finding his current home in Chicago.

"What a special night for it to happen in Ottawa where it started," said Hossa, who stood and waved to the fans when they gave him a standing ovation after his accomplishment was announced. "It's a great achievement and a great milestone and I'm very thankful to all that players who helped me achieve this throughout my career,"

"I played (in Ottawa) seven years and the people were nice to me during the time I was here and it was so nice of them for the thanks, so I just stood and thanked them back. I'm always going to remember this."

Patrick Sharp scored the only goal of the shootout to give the Blackhawks the road victory. Jonathan Toews scored twice for Chicago (6-3-1), while Kris Versteeg added a goal in regulation time. Scott Darling turned aside 28 shots for the win.

"It's a special accomplishment," said Quenneville. "It shows you've been consistently productive in your career and he does it, not just production wise but he does it by playing on both side of the puck which makes that 1,000 number pretty impressive."

Hossa's goal was just one of four in a third-period outburst from the two clubs after they went into the period tied 2-2.

"For our group to play the way we did and to get a point out of it I think it's a great way to continue momentum. We had a lot of great efforts and we can feel pretty good about it."

Ryan gave the Senators a 3-2 lead just 30 seconds into the period when he grabbed a loose puck in front of the Blackhawks goal and surprised Darling with a quick shot.

Toews scored his second of the game at 7:31 and then Hossa gave Chicago the lead six minutes later on a shot Anderson admitted he misplayed.

The Senators pressured Chicago in its own end until Zibanejad scored not only his first goal of the season, but also collected his first point when he beat Darling through the legs from the slot at 17:52.

"They were able to pick me up on that fourth one and tie it up to get us to overtime," Anderson said. "That was huge with Mika getting on the scoreboard for us and picking up for my mistake but that's what it's all about, picking up your teammates when something goes wrong and our guys did a great job."

MacArthur scored the only goal of the second period and it tied the game 2-2 just 2:51 into the period.

With the Blackhawks shorthanded as Duncan Keith served time for holding, MacArthur jammed a loose puck through Darling's legs during a goal-mouth scramble.

Both teams had several good scoring chances throughout the rest of the period but both Darling and Anderson elevated their play. There were also lots of good opportunities in the opening 20 minutes as well, especially from the younger players on the Senators.

After taking a pass from second-year defenceman Cody Ceci, Stone passed off to rookie Curtis Lazar and then headed to the front of the net where he tipped Lazar's shot through the legs of Darling.

The Senators held that lead until the Blackhawks scored twice in a span of just over four minutes in the second half of the period.

Toews tied the game 1-1 when his wrist shot barely crossed the goal line behind Anderson with several bodies in front of the net.

The Blackhawks then took their first lead at 15:36 when Versteeg slipped around Senators defenceman Erik Karlsson in the faceoff circle and then went around a sprawling Anderson before tucking the puck inside the far post.

That goal came moments after Mike Hoffman had a great opportunity to give the Senators the lead.

Notes - Senators goaltender Robin Lehner missed Thursday's game as he spent the evening with wife Donya and son Lennox, who was born earlier in the day…Other than Lehner, Colin Greening, Erik Condra and Mark Borowiecki were scratches for the Senators. David Rundblad, Daniel Carcillo and Antti Raanta did dress for the Blackhawks.