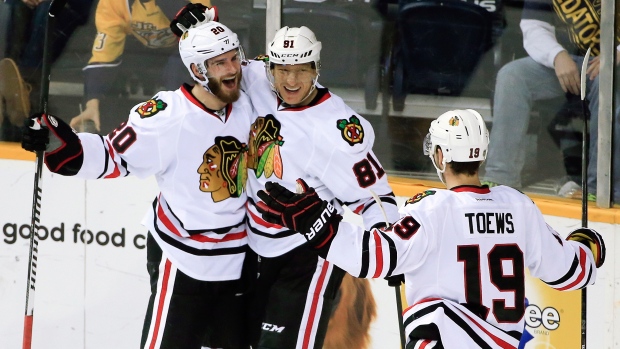 NASHVILLE, Tenn. - Chicago's top line put them on top of the Central Division.

Marian Hossa scored two goals to lead the Blackhawks to a 3-1 win over the Nashville Predators on Saturday.

Brandon Saad had a goal and an assist for Chicago, which won its sixth game in a row and ninth in the last 10. With the win, the Blackhawks took over the Central Division lead, one point ahead of both the Predators and the St. Louis Blues.

"We're excited," Chicago coach Joel Quenneville said. "We put ourselves in the spot we were hoping to be after 20 games, but we shouldn't be satisfied. We should be looking to improve off these levels which would make us a good team."

Colin Wilson had the lone goal for Nashville, which saw its seven-game home winning streak end. It was just the second regulation loss at home for the Predators this season.

"I'm really confident in our team," Nashville coach Peter Laviolette said. "You'd like to go and win them all. That would be a really great season and everyone would sleep well at night. Obviously that doesn't happen."

Saad scored the game's first goal at 14:53 of the opening period.

Just outside the Nashville blue line, Hossa and Duncan Keith forced a turnover by Nashville's Eric Nystrom. Saad carried the puck in on the left side and beat Nashville goaltender Pekka Rinne with a wrist shot high to the far side.

Hossa doubled the Chicago lead at 2:48 of the second.

Saad carried the puck in on the right side with Jonathan Toews skating through the slot. Saad sent a pass to Hossa on the left, where he had an easy tap-in for his fourth goal of the season.

"Saader made an unbelievable play and Johnny drove the net and basically the defender didn't see me behind his back and I had a wide-open net," Hossa said. "Definitely I felt great relief and that kind of give you a little jump and energy."

Early in the third, Wilson was able to beat Chicago's Scott Darling with a wrist shot from the left boards after it deflected off of Blackhawks defenceman Niklas Hjalmarsson.

"I think we just changed our mentality and started playing the way that we're capable of," Wilson said of the team's third period. "We always know that our destiny is kind of in our hands. If we play our best game, we're going to give ourselves a chance to win the game every night."

Darling made 32 saves in the game.

"The guys did a great job," Darling said. "A lot of the shots were (on the) perimeter and they let me see it and cleared out all of my rebounds, which is great."

Hossa added an empty-net goal with 1:11 remaining to account for the final margin.

Notes: Nashville D Anton Volchenkov missed the game with a lower-body injury. Wilson has goals in three of his last four games. Saad has points in four-consecutive games. Chicago D Klas Dahlbeck made his NHL debut.