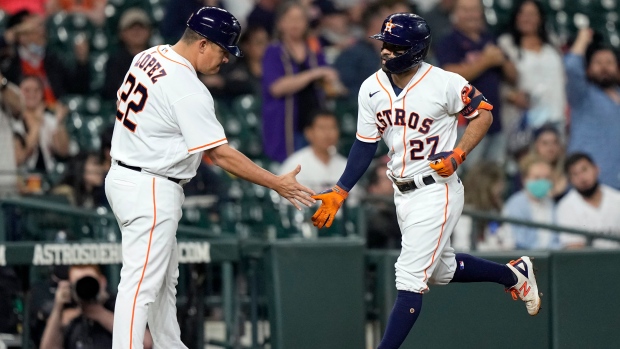 Altuve launched a leadoff homer and Gurriel, who also went deep Tuesday, added his two-run shot later in the first inning. Kyle Tucker also connected for a second straight game when he smacked another two-run drive off Andrew Heaney (1-3) in the sixth to make it 5-0.

Houston starter José Urquidy allowed two hits and struck out four in 3 2/3 innings before leaving with posterior shoulder discomfort. Brandon Bielak (2-2) was solid after Urquidy’s early exit, giving up just two hits and a run in 3 1/3 innings for the win.

Yordan Álvarez hit a solo homer and Chas McCormick added a three-run shot in the eighth to help the Astros win their second consecutive series after they also took two of three from the Blue Jays.

Angels two-way star Shohei Ohtani batted leadoff, making him the first player to do so the day after making a pitching start since Ray Caldwell for the Yankees in July 1916. Ohtani, who struck out 10 in seven innings on Tuesday night, went 0 for 4 with two strikeouts on Wednesday.

Heaney yielded a season-high nine hits with five runs in 5 1/3 innings for his second straight loss.

Altuve sent the first pitch he saw off the foul pole in left field. There were two outs in the first inning when Álvarez singled, and Gurriel made it 3-0 with his opposite-field shot to the front row of seats in right.

Carlos Correa singled after that before Heaney settled down, retiring 12 of the next 13 before Michael Brantley and Alex Bregman hit consecutive singles with two outs in the fifth.

Correa singled again with one out in the sixth before Tucker chased Heaney with his towering shot to the second deck in right field to push the lead to 5-0.

There were two outs in the fourth when Urquidy was injured. Pitching coach Brent Strom and a trainer came on the field to check on him before they summoned manager Dusty Baker, and Urquidy was removed from the game.

The Angels cut it to 5-1 on a sacrifice fly by Drew Butera in the eighth.

Angels: 3B Anthony Rendon, on the injured list since May 3 with a left knee bruise, is improving and could be activated Friday for the start of a series at Boston. ... SS José Iglesias returned to the lineup after missing three games with back tightness.

Astros: RHP Jake Odorizzi threw live batting practice and will begin a minor league rehabilitation assignment in a few days. He’s been on the injured list since April 24 with a strained muscle in his right arm.

Angels: Los Angeles is off Thursday and RHP Griffin Canning (3-2, 5.19 ERA) will start the series opener Friday against Boston.

Astros: RHP Cristian Javier (3-1, 2.90) is scheduled to start Thursday night in the opener of a four-game series against Texas.