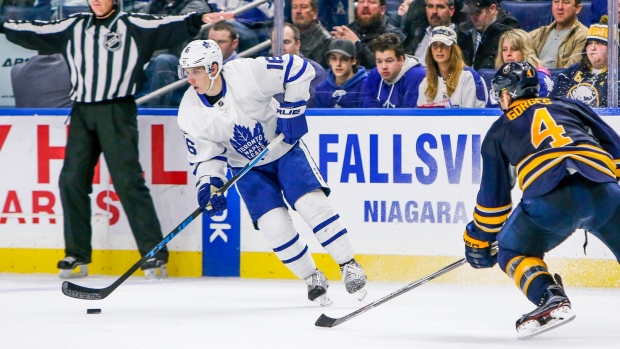 TORONTO — Auston Matthews is finishing up the most impressive rookie season in the 100-year history of the Toronto Maple Leafs, but you won't find his picture around the Air Canada Centre — not on the scoreboard, on billboards or even in the promotion of team merchandise.

You won't even catch Matthews giving a 30-second in-game interview.

The Leafs have strict measures in place to shield rookies like Matthews from the spotlight. The club also wants to prop up forgotten veterans and ensure that no one — not even the highest scoring first-year player the team has ever seen — is bigger than the logo.

Matthews was selling more jerseys league-wide than anyone but Sidney Crosby in the first three months of his NHL career, but when the club had new sweaters to promote for the Jan. 1 Centennial Classic they chose to feature Tyler Bozak, Matt Hunwick, Leo Komarov and fourth-year defenceman Morgan Rielly.

Matthews stole the show that day under the lights at BMO Field anyway, scoring twice, including the overtime winner.

Walk around the ACC, and you won't see faces from a historic rookie class that's shattered franchise records for goals, points and assists, but you might see Bozak, Nazem Kadri or James van Riemsdyk. During breaks in the action at Leaf home games, the club might air pre-taped bits of players reading mean tweets or guessing which artist sang which song, but those bits won't include a single rookie either.

When Matthews broke Wendel Clark's 31-year-old record for goals last week against Florida, TSN couldn't interview him in the first intermission nor could they get William Nylander or Zach Hyman, the linemates who assisted on historic goal No. 35.

The Leafs will make the odd exception for history — such as when Matthews became the first player in NHL history to score four goals in a debut — but only after the game is already done.

The club just doesn't want Matthews, Nylander, Mitch Marner or any other inexperienced player distracted by what they should or shouldn't say in an interview.

"Just be a hockey player," said Lamoriello, who declined to say whether the practice would extend to next season with the current crop.

The Leafs, it's worth noting, are co-owned by Bell and Rogers, major media companies that broadcast their games.

Beyond just protecting the young guys, the Leafs are also wary of their more established players getting overlooked. Talk to Lamoriello about the team at any point this season and he's bound to have worked in some reference to the play of the vets as well as the Mike Babcock-led coaching staff.

Leafs brass are also well aware of Toronto's legacy of over-hyping young players and then have the weight of those expectations come crashing down. Luke Schenn, for instance, made the Leafs at 18, was quickly labelled by management as a future captain and then traded a short while later when his play dropped off.

Lamoriello instituted a similar policy for rookies while he ran the New Jersey Devils, but said the plan for Toronto was agreed upon collectively by himself, Babcock and team president Brendan Shanahan.

It's a somewhat archaic policy in this increasingly open age, but has it worked? Even Lamoriello can't really say, but it probably hasn't hurt.

Rielly, for one, joined the club before the policy came into being — it started when Lamoriello came aboard in 2015 — and thought it was beneficial.

There's a case to be made that the Leafs are short-shrifting fans in their protection of the finest rookie class in team history while also failing to fully cash in on their play. Shanahan, however, has long insisted that the organization won't sacrifice the ultimate goal of Stanley Cup contention for immediate payoffs.

"No matter what the successes would be or would not be (this season), this is the right thing," Lamoriello said. "If there is some success coming quicker than maybe people might expect that can't get in the way of doing what's right."

Lamoriello was asked if it was possible to keep the practice of protection up in today's age of media exposure.