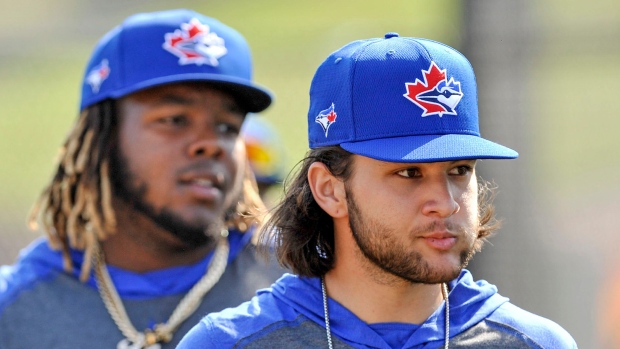 TORONTO — Bo Bichette was supposed to be less than a week from his first opening day, his first time standing at shortstop as a major leaguer amidst all of the pomp and pageantry that comes with a new baseball season.

Instead, he’s been using the past few days to get ready to leave his temporary spring training residence in Dunedin and head back to his home some 40 minutes or so down the road in St. Petersburg, Fla.

There, he’ll formulate a plan in an attempt to stay ready for a season that could be two months away.

This is how the Toronto Blue Jays are spending their days as the effects of coronavirus are being felt across the world.

Slowly but surely, players trickled out of Dunedin this week after Major League Baseball made the obvious decision Monday to follow the latest Centers for Disease Control and Prevention (CDC) guidelines, with the league giving players three options: return home, stay in your spring training city, or go back to your club city’s home.

Option A has been the overwhelming choice.

Bichette estimates there were around 10-12 players from the Jays’ 40-man roster left, with most of them finalizing plans to return to their home cities over the next few days.

The handful of players who live in the area or have permanent residences were mostly the ones filtering in and out of the TD Ballpark cages over the past few days, where hitting coach Guillermo Martinez has been providing one-on-one instruction for those interested.

Most of them are just trying to find ways to kill time.

The coaching staff is also packing up shop, and many executives around baseball expect MLB to eventually follow the NBA’s lead and close down training facilities completely as COVID-19 numbers continue to soar.

As we’ve all experienced firsthand over the past week, it’s been a complete whirlwind for ballplayers, too.

They’re just starting to wrap their mind around the events of the past 10 days.

"Our heads weren’t moving as fast as the announcements were coming," Bichette said. "When the first announcement came, we definitely thought at first, ‘OK, April 9 we’re going to start.’ It wasn’t that big of a delay. And then more announcements came and, I think, we still had that same mindset at first. Then you kind of evaluate it and say, ‘OK, do I need to be here for two months, maybe even three, because who knows what’s going to happen?’

"For now, the complex is open for whoever needs to use it, but (the club) made it clear to us if, in a couple days, there’s a new mandate to shut everything down, then the complex is shut down and we need to figure out what to do. I think that’s a big reason in some people’s thinking. They’d rather get home before there are travel bans or anything like that. We don’t know what’s going to happen."

A week ago, the Jays split up the squad and had a pair of Grapefruit League games going along the Gulf Coast. One in Dunedin against the Canadian Junior National Team, and one down the road in Bradenton against the Pittsburgh Pirates.

Those were the final games played of any kind before North American sports shut down in unprecedented fashion.

"Yeah, man, this stuff went fast," Bichette said. "It was nothing a week ago and just such a small matter, but now everyone has kind of realized the severity of it. We need to do what we can to help with the virus and help slow it down, but we were two weeks away from getting everything going and now we’re shut down. It’s pretty crazy."

THE NEXT FEW WEEKS

Bichette’s alarm has gone off before dawn every single morning as usual.

But there’s been nothing usual about the last week and a half.

After making the 12-minute trek to TD Ballpark, Bichette was simply trying to find some semblance of normalcy.

He stretched. He worked out. He threw. But he wasn’t spending any time in the cages.

"I’m trying to keep my body in shape and my arm in shape," he said. "I’m actually planning on taking a little bit more time off from hitting and maybe even from throwing with the new announcement that it’s going to be two months."

In an unexpected and unexplainable limbo is where baseball sits, with little guarantee of things getting better at this point.

The latest CDC guidelines say no gatherings or events of more than 50 people for the next eight weeks, an announcement that came down March 15.

Even if baseball as a whole was able to mobilize quickly in order to put together a short spring training — three weeks is considered ideal — it would push a potential opening day into late May or early June.

MLB has stated it hopes to play as many games as possible, potentially even 162, which is a complete pipe dream at this point.

Most online sportsbooks have set a June 1 over/under date for an amended opening day, but there’s little doubt expanded rosters, baseball well into November, a compacted schedule, as well as multiple double-headers will all be on the table in 2020.

Staying ready for what’s sure to be a quirky and challenging restart will be the players’ focus, but that isn’t exactly easy with training facilities, whether run by teams or private workout spots that players frequent in the off-seasons, shuttered for the foreseeable future.

It’s essentially another off-season to manage. One without all of the resources they’re used to.

"In the next few days, I’ll be talking to my dad about a lot of different ideas about how we go about the next couple of months," Bichette said. "How much I want to stay ready and how much I want to take a break and then just ramp back up. Same goes with working out. Me and my trainer will come with an idea of what’s going on."

Bichette says infielder Santiago Espinal, a Miami native, and outfielder Forrest Wall, a product of Winter Park, Fla., near Orlando, are planning to train alongside him in the Tampa area.

Like many, however, Bichette’s immediate focus is on the virus and doing his part.

"Everybody, not just us as players, has a responsibility, especially as young people, to try to do our best to stay inside and do our best to stop spreading this thing," Bichette said. "My career, my future is kind of in the rear view right now. I’m focused on what I’ve got to do right now."

Behind the scenes, the COVID-19 shutdown on the eve of the season has league executives and the MLB Players Association scrambling to find common ground on a number of issues on the business side of things.

They’re issues that players are keenly aware of, even one with just 46 games and 63 days of big-league service time like Bichette.

As players milled around the TD Ballpark clubhouse this week, the topic was being discussed.

"There’s so many logistics, too, for us players, that we need to figure out," Bichette said. "Service time and money and everything. That’s something the players association has to figure out, so those are big discussions we’re having in the clubhouse and, hopefully, we get that sorted out soon with the league."

The service time issue could get contentious, and it gets even trickier if the entire season is wiped out.

A player needs to spend 172 days on a major-league roster in order to accrue a year of service time.

But it’s clear the 2020 campaign will now feature significantly less than the 186 days it was originally spread out over, leaving the league and the PA to find some pro-rated ground.

A schedule starting on June 1 would give them 119 days through the end of what would be a normal regular season, finishing on the final Sunday in September.

Then there’s the process of going through contract language and finding a way to pro-rate vesting options — a pitcher’s contract may vest for 2021 with 150 innings pitched in 2020, but what if 150 innings isn’t realistically attainable during a shortened schedule? — and playing time incentives, while also trying to figure out how fewer games will impact future arbitration cases.

The draft, scheduled for June 10-12 in Omaha, has also been a hot topic.

Baseball shut down all travel for scouts this week, both domestic and international, and there’s already talk of combining the 2020 and 2021 draft classes and skipping this year’s selection process altogether.

While that’s far from ideal, everything is simply at the workshopping stage with so much uncertainty and any semblance of normalcy still weeks away.

With no baseball in sight and the economic landscape the sport returns to a terrifying unknown, drafts, contracts and service time will be hashed out by those with vested interests when the time is right.

In the meantime, wash your hands and wait.