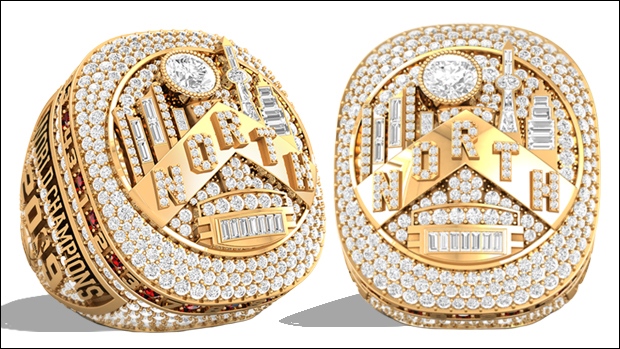 TORONTO – On a conference call in late June, shortly after the Toronto Raptors won their first title, a small committee began the four-month long process that would ultimately produce the most valuable NBA championship ring ever.

The select group included representatives from ownership and the front office, as well as a fitting team rep, their longest-tenured player, Kyle Lowry.

After seven seasons in Toronto, with all the sweat equity he’s poured into the franchise and the connection he’s built with the city and the country, there was nobody better suited for the job. Lowry was the easy choice, and it didn’t take him long to make his presence felt.

Early in their initial set of meetings, Lowry told the others he wanted the ring to be unique to the Raptors and their origins. He wanted it to be bold and expensive and to feel like an extension of himself and each of his teammates. Most of all, he told them he wanted to be “wowed.”

The Raptors return to TSN on Friday! Stream Raptors vs Celtics, along with 40 more Raptors & +160 U.S. games this season with TSN Direct.

“This is the first one in the organization’s history and I think that was one of the things we wanted, to make sure it stands apart from every other ring that’s been done before,” the five-time all-star said. “It’s the first team outside of the U.S. to have a ring, to win a championship, so we were like, ‘Listen, we can’t have it be like anyone else. We have to be different.’ ...Honestly, we wanted to spend as much money as we possibly could.”

Lowry was in on every call, every meeting. They worked with three world-class jewellers, each of whom presented their own design based on the list of elements the ring committee wanted to incorporate. Once they saw the version they liked, it was a unanimous decision.

“It blew everyone away,” Lowry said.

Unlike most championship rings, which feature the team name and logo on the face, the Raptors opted to try something new. Instead, diamonds would spell out NORTH inside of a chevron in homage to the red and white alternate jersey the team wore during their title-clinching Game 6 win in Oakland. Behind it would be the CN Tower and the iconic Toronto skyline sitting atop the team’s home, Scotiabank Arena. At the centre of it all would be the Larry O’Brien Trophy, topped by a 1.25-carat diamond – the largest single diamond in any professional championship ring ever. 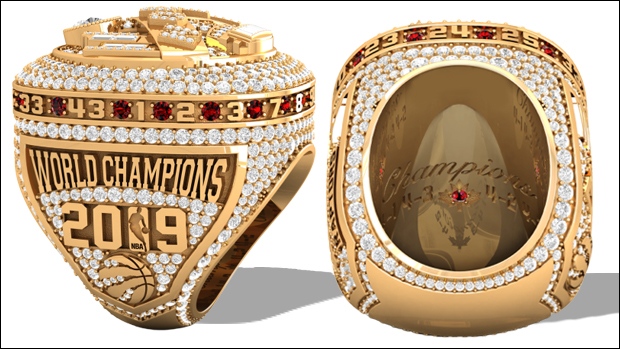 “True to our outsider mentality what we really wanted to do is tell a story with where we’ve come from and where we are now as world champions,” said Shannon Hosford, chief marketing officer at MLSE. “All these pieces tell a story, not only for the team but for the country and, most importantly, our fans.”

To bring their vision to life, the Raptors chose Baron Championship Rings, a Canadian company based in Windsor, Ont. In recent years, Baron has crafted rings for three other Toronto-based teams – the Marlies of the American Hockey League, Toronto FC of Major League Soccer, and Raptors 905 of the NBA G League. This would be the second NBA championship ring they’ve produced, after doing the Cleveland Cavaliers’ rings in 2016.

Lowry had one last note before they could begin production: the ring wasn’t big enough.

“They didn’t want as big of a ring, honestly, but that was the one thing that I wanted personally,” Lowry said. “This is not a ring you wear every day. This is a statement piece. You don’t wear it every day, you put it up, you can wear it once and while, but I wanted [it to be larger] just because we wanted to show the details.”

He didn’t want the skyline to be flat, so they gave it some texture. He wanted more diamonds, so they added more diamonds. He wanted it to be bigger, so they created the largest championship ring in history at more than 14 tcw (total carat weight).

Lowry hoped to be wowed and in the end, he was. He flew to Toronto to see the finished product in person.

“When he first saw the ring, I watched him specifically, and his eyes lit up and he was like ‘Wow’,” Kanis said. “When we first came out with the design and showed him the design, it looked great. But then when you actually see the ring in person, he couldn’t put it down. And then when he did put it down, two seconds later he was like, ‘Can I get it again?’”

The Raptors’ championship ring features more than 650 diamonds – a record-setting number – including 74 around the Toronto skyline to represent last year’s win total – regular season and playoffs combined. All of the gold and diamonds used in the ring were sourced from Canada.

The team logo is on one shoulder of the ring with the words “World Champions” while the other shoulder displays each specific player’s name and jersey number. The outer edge of the ring has 16 rubies along with the jersey numbers of all 16 players on the championship roster, as requested by Lowry. On the inside of the ring there’s a maple leaf, the score from each playoff series, and room for each player to include their own personalized message.

There are five different tiers of rings. They made roughly 20 of the highest and most valuable version, which were awarded to the players and a few high-ranking officials before Tuesday’s season opener. The fifth tier are replicas of the exact same design the players received and there were 20,000 of them handed out to each fan in attendance for Tuesday’s game.

One of the things important to Lowry was that each ring, regardless of tier, looks similar and makes the person wearing it feel the same sense of pride.

“It’s a very special ring,” Lowry said. “It’s something that [we all] earned and it took a long time to get, besides Patrick McCaw – he has three now. So we just wanted our ring to be a little bit better than his other two.”

With the exception of Lowry, none of the players had seen their ring before receiving it as part of the banner-raising ceremony at Scotiabank Arena on Tuesday night. That’s the way the all-star point guard wanted it. After months of anticipation he finally got to see their reaction as they put on the work of art he and the rest of the committee had spent the summer crafting.

Lowry doesn’t plan to wear his ring much, at least not immediately. His two kids are looking forward to getting some time with it, but mostly it will be kept on display in his home in a spot he has already prepared.

Once he retires and he’s able to reflect on his accomplishments he may put it on more often, although he’s hoping to add at least one more to the collection before he calls it quits.

650+: Total diamonds – the most ever in any professional championship ring.

74: Diamonds in and around the Toronto skyline representing last season’s win total, including playoffs.

14: CT of diamonds – most ever in any professional championship ring.

1.25: CT diamond on top of the Larry O’Brien Trophy – largest single diamond ever in any professional championship ring.

14: tcw (total carat weight) – most ever of any professional championship ring.

16: Genuine rubies on the outer edge, representing the number of wins in the playoffs, along with the jersey numbers of each player on the roster.

6: Round diamonds on top of Scotiabank Arena to represent “The Six”