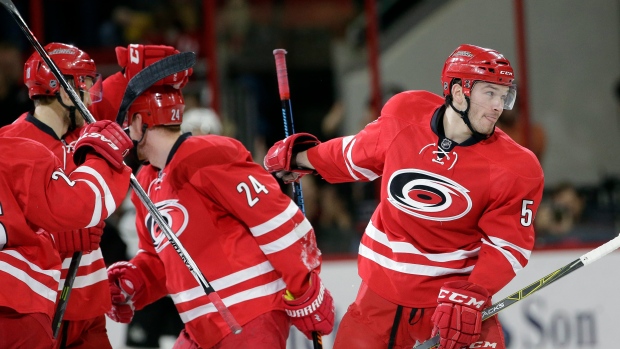 In a league where two-thirds of the teams are starving to improve their blueline, the Anaheim Ducks aren't the only ones with great leverage because of their crazy depth on D.

The Carolina Hurricanes are knee-deep too, with young D throughout the organization -- and there's no question they're attracting attention from potential suitors ahead of the trade deadline.

"I think everyone is always looking for D and we feel comfortable with our depth there," Hurricanes GM Ron Francis said Thursday. "We're always looking at all options to make our team better; if that's an area of strength and you can address an area of weakness, we'd certainly look at those possibilities."

My guess is that the Hurricanes would potentially move a young defenseman, whether  that's an NHL player or prospect, if it netted them a front-line centre. That's the premium target Carolina would like to find over the next 5-6 months.
The Hurricanes have scouted Colorado Avalanche games over the past two weeks, which has raised the antennae of some, given how desperate the Avs are to begin their retooling by finding young, high-end defensemen.

I'm just not sure how interested Carolina would be in star centre Matt Duchene because he's only got two more years on his deal after this season. I'm not convinced the Hurricanes would want to give up a high-end, young D for a player they might lose in two years.

Would Avs winger Gabriel Landeskog be of more interest? He's got a long-term deal. But he's not a centre.

Carolina's D, if you're Colorado or any other team drooling for a young blue-liner, has a lot to like: Brett Pesce, 22; Jaccob Slavin, 22; Noah Hanifin, 20; Ryan Murphy, 23; there there's Haydn Fleury, 20, having a nice AHL season, Trevor Carrick, 22, another AHLer perhaps ready for the NHL next season; and 18-year-old junior Jake Bean coming up the ranks.

Colorado would not be alone, of course, in looking at Carolina's D depth. I mean, who doesn't need a good young D? The Tampa Bay Lightning, Toronto Maple Leafs, Buffalo Sabres, Calgary Flames, Winnipeg Jets and Detroit Red Wings are just some teams on that list.

Could Carolina pry William Nylander out of Toronto? If I'm the Hurricanes, I would certainly try but I don't sense the appetite by the Leafs to move the skilled forward. Then again, how does Toronto find that young, high-end defenseman over the next 5-6 months? Anaheim and Carolina are obvious places to look for the Leafs.

The Hurricanes aren't out of the playoff race. Could they kill two birds with one stone and make a trade that helps their case now but also addresses a long-term need?

"We've got a tough schedule coming out of our break," Francis said. "I think we've got 29 games in 52 days starting on Friday. Now, we've got 17 of those 29 at home. We open after the break with a five-game home stand. So it will be interesting to see where we are towards the end of next week, and then you make your decision based on whether it's something you want to do to help your team this year. Our philosophy has always been the same: if we're looking at something at this point, it's something that has to make us better now, but also has to make us better in the long haul."

Another question for the Hurricanes is if they ever decide to make a meaningful trade whether the time is now before March 1 or whether the offseason presents a wider variety of options with other teams less restricted by the salary cap.

"We have [cap] room, we can help teams out in that regard if they want to do something with us," Francis said. "But certain teams are looking to buy at this point and not everybody is. You're more apt to make a more significant hockey trade maybe in the offseason."

Unless, of course, a team is desperate enough to fill its blue-line void by making an offer the Hurricanes just can't refuse before March 1 at 3 p.m. ET. Don't discount that possibility.