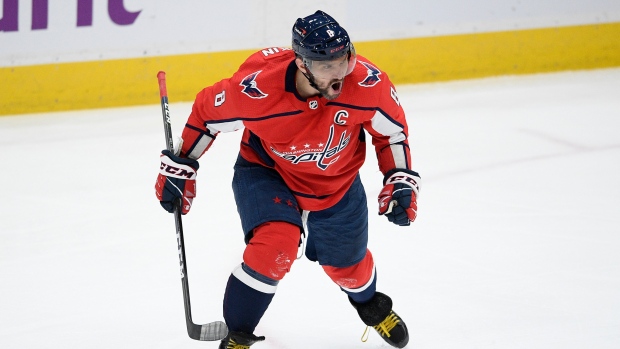 Forward Alex Ovechkin is on the ice for Washington's optional skate Tuesday morning according to Samantha Pell of the Washington Post.

Pell reports Ovechkin will be a game-time decision as the Capitals wrap up their regular season Tuesday night against the Boston Bruins.

Vitek Vanecek will be in net tonight vs Boston, per Laviolette.

Alex Ovechkin (lower-body) will be a game-time decision.

Alex Ovechkin (lower-body) is on the ice for the Capitals' optional morning skate ahead of their game vs Boston tonight. Will see his status for the game in a bit.

He has been out since May 3 because of a lower-body injury.

Defenceman Mac Hollowell has been added to Toronto's taxi squad.

Defenceman Mac Hollowell has been reassigned to the @MapleLeafs taxi squad.

At practice Tuesday, Alex Galchenyuk and Pierre Engvall were in taxi squad grey, while Zach Hyman, Nick Foligno and Riley Nash were in regular sweaters.

Meanwhile, defenceman Justin Holl was back on the ice after a maintenance day on Monday.

Canadiens goaltender Carey Price is back on the ice and participating in his first full practice with the team since being sidelined with a concussion.

#Habs Price looks like he’ll take part in his first full practice since suffering a concussion on April 19. @TSN_Edge pic.twitter.com/MHvLItyKKY

Price has been sidelined since April 19. He also skated on Monday after the morning skate with goalie coach Sean Burke and the scratches.

The Habs secured the final playoff spot in the North Division on Monday night in a 4-3 overtime loss to the Edmonton Oilers. The team has one regular season game remaining on their schedule.

The Senators announced that left winger Vitaly Abramov and defenceman Cody Goloubef have been re-assigned to the AHL's Belleville Senators.

Meanwhile, Logan Brown has been recalled from Belleville and re-assigned to Ottawa's taxi squad. Brown has not played a game at the NHL level this season but does have one goal and six assists in 12 AHL games.

LW Vitaly Abramov and D Cody Goloubef have been re-assigned to @BellevilleSens.

C Logan Brown has been recalled from Belleville and re-assigned to the team's taxi squad.

Head coach DJ Smith told reporters that Colin White and Matt Murray will not play in Wednesday's season finale, but Brown will make his season debut. Parker Kelly will also suit up against the Toronto Maple Leafs on Wednesday.

DJ Smith says Colin White and Matt Murray will not play in season finale on Wednesday.

But Logan Brown will make this season debut versus Toronto. Parker Kelly will also suit up vs the Leafs.

The Bruins are sitting a number of veterans as they wrap up their regular season Tuesday against the Washington Capitals, including David Pastrnak, David Krejci, Patrice Bergeron, Brad Marchand, Charlie Coyle, Brandon Carlo and Charlie McAvoy.

Here's the full list of Bruins regulars not playing today, per Cassidy: