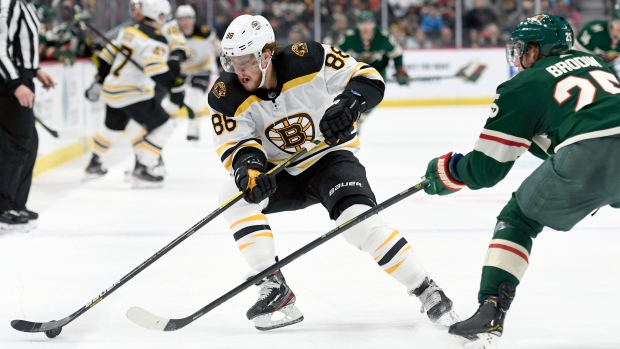 Forward David Pastrnak is skating in a regular white jersey at practice this morning, ditching the non-contact sweater.

Pastrnak had hip surgery on Sept. 16 with the original prognosis of returning to play in mid-February. Head coach Bruce Cassidy says Pastrnak is expected to be out at least two more games.

The Tampa Bay Lightning will be without forward Mitchell Stephens for the foreseeable future, while defenceman Erik Cernak's injury outlook is more optimistic.

Injury updates: Mitchell Stephens is out indefinitely with a lower body injury and Erik Cernak is day-to-day with an upper body injury.

Stephens, 23, has one assist in four games this season with the Lightning. The 2015 second-round pick posted three goals and six points in 38 games with the Lightning last season, adding one goal in seven games during the NHL's Return to Play as the Lightning won the Stanley Cup. NCAA

Cernak also has one assist in four games this season, while averaging 16:32 of ice time. The 23-year-old had five goals and 12 points in 67 games last season, adding four assists in 25 postseason games.

He signed a three-year, $8.85 million contract with the Lightning this past offseason.

The Flames have assigned forward Derek Ryan and defenceman Oliver Kylington from the main roster to the taxi squad.

#Flames Roster Update: Derek Ryan and Oliver Kylington have been assigned to the taxi squad from the roster.

Mikko Koivu was on the ice this morning. He's been on the COVID-19 list since the beginning of the season with general manager Jarmo Kekalainen indicating that Koivu will make his Columbus debut on Tuesday against the Florida Panthers.