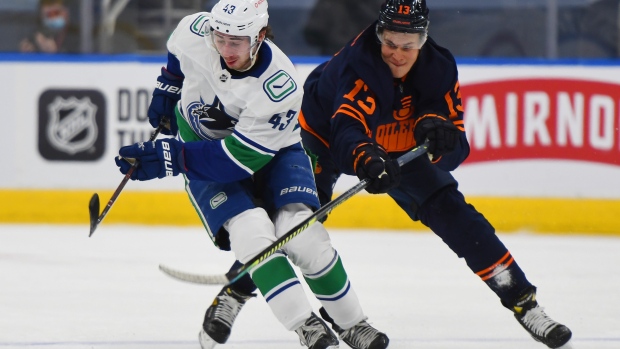 Forward Jesse Puljujarvi was promoted to the top line at practice today as the Oilers prepare to face the Winnipeg Jets tonight.

Puljujarvi has one assist in four games so far this season.

Goaltender Kevin Lankinen will make his third consecutive start this afternoon against the Detroit Red Wings.

Kevin Lankinen will start in goal for a third straight game and Carl Soderberg will make his #Blackhawks debut, replacing Lucas Wallmark.

Forwards Taro Hirose and Givani Smith have been recalled from the Red Wings' taxi squad. Neither player has yet to suit up in 2020-21.

Hirose had two goals and seven points in 26 games with the Red Wings last season.

Cozens has a goal and an assist in five games this season. Mittelstadt has yet to appear in a game in 2020-21. He had four goals and nine points in 31 games last season with Buffalo.

Forward Kyle Okposo has been activated from the injured reserve.

We have recalled forward Casey Mittelstadt from the taxi squad and loaned forward Dylan Cozens to the taxi squad. ⁰⁰Additionally, forward Kyle Okposo has been activated from injured reserve.