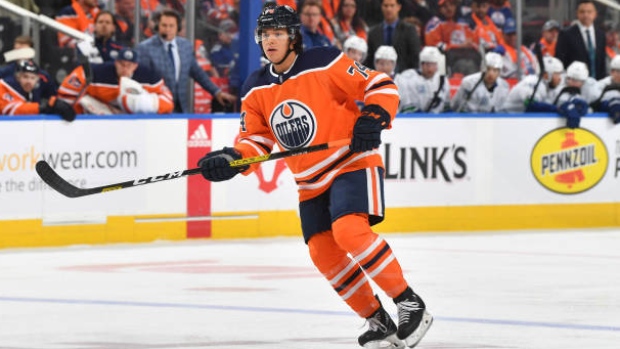 Coach Tippett notes that Ethan Bear won't be available tonight when the #Oilers take on the Flames.

Bear has two assists in nine games for the Oilers this season.

Forward Jujhar Khaira and goaltender Stuart Skinner have been recalled to Edmonton from the taxi squad.

RNH-McDavid-Puljujarvi
Kahun-Draisaitl-Yamamoto
Kassian Turris Neal - ( could be Haas instead at 3C, and not positive Neal goes here)
Haas Archibald. (Khaira or Shore could draw in if they go 12f)

Goaltender Jake Allen starts in net as the Habs visit the Sens in Ottawa Saturday afternoon.

#Habs Julien says Armia has been "doing really well; on the mend". He hasn't been skating because of flu-like symptoms. The hope is to get Armia back with the team for Monday's practice.

Meanwhile, head coach Claude Julien told reporters that forward Joel Armia is doing "really well" and is on the mend. He has not been skating recently because of flu-like symptoms, however he is not on the NHL's COVID-19 list. Julien added the hope is to get him back with the team for Monday's practice.

The Flames announced Saturday they have recalled forward Byron Froese from the AHL's Stockton Heat.

The #Flames have recalled forward Byron Froese from the @AHLHeat. pic.twitter.com/2Xh9th76IA

"Throughout this season, there's been talk of the need for more emotion and competitiveness with the Calgary Flames. The team's bottom-6 forward mix could have a different look come 8 pm MST," tweets TSN Salim Valji.

Throughout this season, there's been talk of the need for more emotion and competitiveness with the Calgary Flames.

The Jets announce that forward Pierre-Luc Dubois is out of quarantine and will skate for the first time as a member of the Winnipeg Jets.

It’s a day off for the team, but fresh out of quarantine, Pierre-Luc Dubois is set to hit the ice for the first time as a Jet! pic.twitter.com/AfO5tPoYYq

It will otherwise be a day off for the Jets, who are scheduled to be back in action in Calgary against the Flames on Tuesday.

Nils Hoglander is being dropped to the Canucks' third line while forwards Loui Eriksson and Justin Bailey will make their season debuts Saturday against the Leafs. Here are their expected lines according to TSN's Farhan Lalji:

Head coach Sheldon Keefe confirmed that the only lineup change for the Leafs Saturday will be Mikko Lehtonen drawing in for the injured Travis Dermott.

It was announced Friday that Dermott would not play against the Canucks on Saturday. TSN's Kristen Shilton reports Dermott is day-to-day.

Travis Dermott is day-to-day, so.

That used to be Babs-speak for "a week to 10 days" but we don't have an equivalent Keefe-ism to apply yet. https://t.co/eEEdfXPaVq

Sens head coach D.J. Smith told reporters Saturday that he will not make any lineup changes for Saturday's game against the Montreal Canadiens.

The Sens beat the Habs 3-2 Thursday night for their first victory in nine games.

Meanwhile, Smith also told reporters that defenceman Christian Wolanin is "way closer" to returning from a lower-body injury. He will participate in the team's practice on Sunday.

If he can get through a rigorous practice with battle drills, it sounds like he could come back to the lineup vs EDM next week.

Smith added that if he can get through battle drills, he could make his return next week against the Edmonton Oilers.

The Kings have claimed goaltender Troy Grosenick off waivers from the Edmonton Oilers.

The 31-year-old was originally claimed by the Oilers from the Kings on Jan. 16 but will head back to L.A. less than a month later.

He has not yet appeared in an NHL game this season.