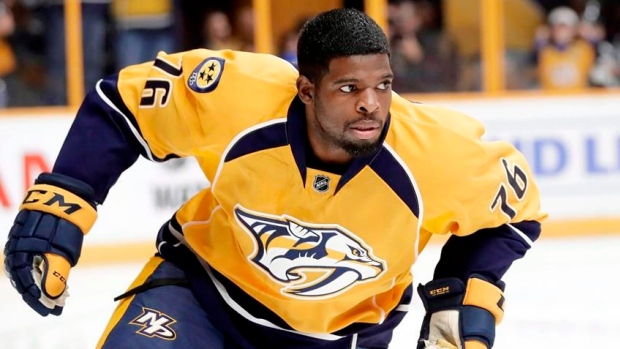 The Associated Press — The Nashville Predators have activated defenceman P.K. Subban off injured reserve, and he is expected to play Friday night in Edmonton.

Subban, 27, has missed 16 games with an upper-injury and was placed on injured reserve Jan. 1. He has seven goals and 10 assists in the 29 games he's played with Nashville.

The defenceman says the Predators, coaches, trainers and himself all came to a consensus Friday morning that he was ready to return. He tested himself a final time at Friday morning's skate.

Subban says everything was good, so they all decided he was good to go.

The Flames intended on having a full practice Friday morning but instead only forwards Sam Bennett, Micheal Ferland, Freddie Hamilton and defenceman Brett Kulak, and goalies Brian Elliott and Chad Johnson took the ice. The different look at practice reflects coach Glen Gulutzan frustrations with his team's effort against the Predators Thursday night.

Gulutzan reiterated Friday that he was unsatisfied with his team's performance lately, despite the fact that they currently sit in a playoff position in the Western Conference standings.

A decision hasn't been made yet, but Bennett is expected to return to the lineup on Saturday against the Oilers. Bennett was a healthy scratch Thursday. - Jermain Franklin, TSN

The team claimed forward Seth Griffith off waivers for the second time this season.

The Leafs claimed Griffith prior to the season when he was waived by the Boston Bruins, but waived him after three games. He was claimed by the Florida Panthers and played 21 games before being placed on waivers on Thursday.

The team assigned Griffith to the AHL's Toronto Marlies after he was claimed.

Rielly missed Thursday night's loss to the New York Rangers with what is officially labelled a "lower-body injury."

The 22-year-old is considered day-to-day.

Defenceman Johnny Oduya is expected to miss two-to-four weeks with an ankle injury. He was placed on injured reserve Thursday.

By the way, Johnny Oduya is going to be out a while, probably 2-4 weeks.

Goalie Cam Talbot is expected to make his sixth consecutive start Friday versus the Predators.

Talbot off ice first so looks like he's playing vs Nash

Forward Matt Beleskey will return to the lineup for tonight's game against the Blackhawks. Beleskey has missed the Bruins' past 23 games due to a knee injury sustained against the Florida Panthers on Dec. 3.

Claude Julien on Matt Beleskey returning from injury: "We'll give him a shot tonight."

Defenceman Niklas Kronwall could return to the lineup tonight against the Buffalo Sabres, the Detroit Free Press reports.

Kronwall has been out since Jan. 4 with a groin injury.

Darren Helm's status against the Sabres will be determined later on Friday. Helm has been out since Nov. 15 with a dislocated shoulder.

Tyler Ennis will return to the lineup tonight against the Red Wings.