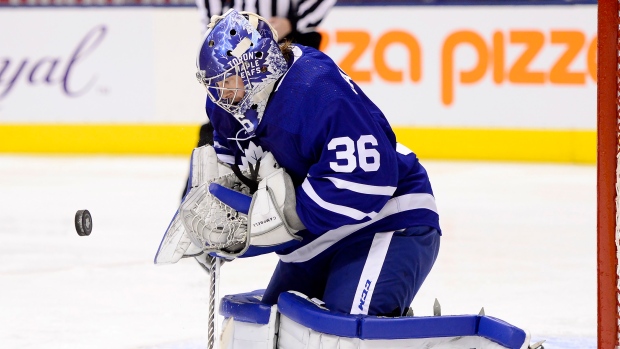 Leafs head coach Sheldon Keefe announced that goaltender Jack Campbell will be given the start Saturday night in the 'Battle of Ontario' Saturday night in Ottawa. Starter Frederick Andersen will start the second game of the team's back-to-back in Buffalo Sunday night.

Frederik Andersen will start in Buffalo on Sunday

Additionally, the Maple Leafs have loaned both forward Pontus Aberg and goaltender Michael Hutchinson to the Toronto Marlies of the AHL. Both cleared waivers Friday

The @MapleLeafs have loaned forward Pontus Aberg to the @TorontoMarlies (AHL).

Goaltender Michael Hutchinson has cleared waivers and has also been loaned to the @TorontoMarlies. #LeafsForever

Jets head coach Paul Maurice confirmed Friday morning that defencemen Tucker Poolman and Luca Sbisa will be returning to the lineup tonight versus the San Jose Sharks. Defencemen Anthony Bitetto and Sami Niku will come out of the lineup.

Optional skate this morning but Paul Maurice confirms that Tucker Poolman and Luca Sbisa return to the lineup tonight. Anthony Bitetto and Sami Niku come out.

The Buffalo Sabres announced today that they have placed veteran defenceman Zach Bogosian on wavers.

Defenseman Zach Bogosian has been placed on waivers. pic.twitter.com/l8IE05FkP1

The 29-year old Bogosian has recorded just one goal and four assists through 19 games this season. The Sabres, who sit 11 points back of the final-wild card spot in the Eastern Conference, have won three of their last four games.

The Rangers announced Friday that they have recalled defenceman Joey Keane from their AHL affiliate Hartford Wolf Pack on the heels of Marc Stall's inability to dress due to an illness.

The Chicago native has 28 points through 48 games with Hartford and recorded an assist in their Feb. 5 game against the Springfield Thunderbirds.

We have recalled TJ Tynan from the Colorado Eagles. #GoAvsGo pic.twitter.com/vLbfNSkF7Z

Through 39 games with the 11th-placed Eagles, the Orland Park, Ill., native has recorded 36 assists and four goals.

Canadiens forward Nate Thompson is battling the flu and will be a game time decision Friday night against the Pittsburgh Penguins.

No changes to #Habs lineup tonight unless Nate Thompson, who is battling flu, isn’t ready at game time. Paul Byron has still not been cleared by medical staff and can’t play #HabsIO

Boston Bruins GM Don Sweeny announced Friday that have signed defenceman Jeremy Lauzon to a two-year extension through the 2021-22 season with an annual cap hit of $850,000.

The #NHLBruins have signed @jeremylauzon21 to a two-year contract extension. Congrats, Lauzy!

Previously, Lauzon spent four seasons with Rouyn-Noranda of the QMJHL where he recorded 130 points in 200 games.