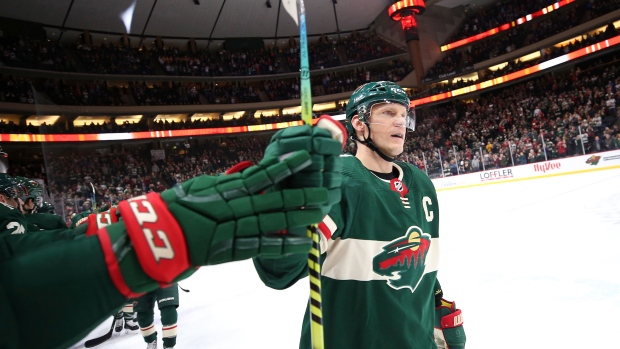 For the first time in his NHL career, Mikko Koivu will take to the ice for a team that isn't the Minnesota Wild on Tuesday.

Blue Jackets head coach John Tortorella confirmed Koivu will make his debut against the Florida Panthers after signing a one-year, $1.5 million deal with Columbus this off-season.

Koivu missed the team's first six games will on the COVID-19 Protocol List.

Tortorella also said that Joonas Korpisalo will get the start in net against the Panthers.

Defenceman Jalen Chatfield took part in a full practice and appears ready to return to the lineup. The 24-year-old skated on a paring with Nate Schmidt. Travis Hamonic, 30, remains on injured reserve.

Jacob Markstrom will make his 5th straight start this season tonight as the #CofRed Flames host the #LeafsForever at the Saddledome.

The Jets have recalled forward Kristian Vesalainen from the taxi squad.

Vesalainen, 21, who was drafted by the Jets in the first round of the 2017 NHL Draft, has played one game with the club this season.

Winnipeg's anticipated lineup for Tuesday's game against the Edmonton Oilers will be as follows, according to TSN's Sara Orlesky.

Head coach Peter Laviolette said Tom Wilson will be a game-time decision for Tuesday's game against the New York Islanders.

Wilson missed Sunday's game against the Buffalo Sabres due to a lower-body injury.

He said team is still sifting through what rest of lineup will look like after calling up Michael Sgarbossa to taxi squad and Brian Pinho sitting out morning skate today.

In a corresponding move, the Blue Jackets have assigned veteran forward Nathan Gerbe to their taxi squad and forward Ryan MacInnis to the AHL's Cleveland Monsters.

🚨 Roster Update: We have assigned F Nathan Gerbe to our taxi squad and F Ryan MacInnis to Cleveland.https://t.co/KjiM3QeaqO

Gerbe, 33, has recorded one assists in his only game played this season. MacInnis, 24,  has not played a game this season. He was selected No.43 overall by the Arizona Coyotes in the 2014 NHL Draft.

Centre Filip Chytil will miss four to six weeks due to an upper body injury suffered on Sunday against the Pittsburgh Penguins.

Filip Chytil will be out 4 to 6 weeks due to an upper body injury suffered on Sunday at Pittsburgh.

Tristan Jarry will start against the Boston Bruins on Tuesday.

Coach Sullivan confirms that Tristan Jarry will get the start in net tonight in Boston. pic.twitter.com/VhkobFwLNy

Avalanche defenceman Erik Johnson will return to the lineup for Tuesday's game against the San Jose Sharks.

Johnson has played just one game this season due to COVID-19.

The Blues have recalled forward Jacob de la Rose from the taxi squad and assigned defenceman Scott Perunovich to the AHL's Utica Comets.

Jacob de la Rose has been recalled from the taxi squad and Scott Perunovich has been assigned to the AHL's @UticaComets. https://t.co/pkdGxnoYSK #stlblues

De la Rose, 25, played 34 games with the Blues last season, recording one goal and four assists. Perunovic, 22, has yet to make his NHL debut after being drafted with the No.45 selection in the 2018 NHL Entry Draft.

Blackhawks head coach Jeremy Colliton says that defenceman Lucas Carlsson and forward Matthew Highmore with replace Adam Boqvist and Alex DeBrincat in the lineup against the Nashville Predators. Both Boqvist and DeBrincat have been placed on the COVID list.

Also said Boqvist and DeBrincat will be out at least “two weeks and then go from there.” #Blackhawks

Carlsson, 23, will be making his season debut for the Blackhawks after playing six games with the club during the 2019-2020 season. Highmore, 24, has played three games this season, failing to record a point.

The Flyers have activated defenceman Shayne Gostisbehere to the active roster after testing positive for COVID-19 during training camp. The team has also recalled forwards Connor Bunnaman and Samuel Morin from the taxi squad.

Roster moves: We have recalled forwards Connor Bunnaman and Samuel Morin from the Taxi Squad.

The Flyers have activated defenseman Shayne Gostisbehere to the active roster.

Gostisbehere, 27, played 42 games with the Flyers last season, recording 12 points. Bunnaman, 22, has played two games with the club this season and has not recorded a point. Morin, 25, was drafted by the team 11th overall in the 2013 NHL draft but has played just eight NHL games.

The Canadiens used the following lines at Tuesday's skate:

Forward Joel Armia skated briefly on Tuesday morning for the first time since suffering a concussion last Thursday against the Vancouver Canucks. There is no timetable for his return.

#Habs Julien said Armia’s brief skate today was the current step in his concussion protocol. No estimated timeline for his return.

The Oilers used the following lines at Tuesday's skate:

Defenceman Matt Grzelcyk returned to pratice after missing Saturday's game against the Philadelphia Flyers due to an upper-body injury. Head Coach Bruce Cassidy said that Grzekcyk, 27, is "very close" but if he is unable to play, Connor Clifton will slot into the lineup.

The Bruins used the following lines at Tuesday's morning skate:

The Stars used the following lines at Tuesday's morning skate:

We have recalled forwards Tanner Kero and Rhett Gardner from the Taxi Squad.

Kero, 28, has played once game with the Stars this season, not recording a point. Gardner, 24, was selected by the club in the fourth round in the 2017 NHL Draft and has not played a game this season. Robertson, 21, was drafted 39th overall by the Stars in 2017 and has not recorded a point in two games this season.