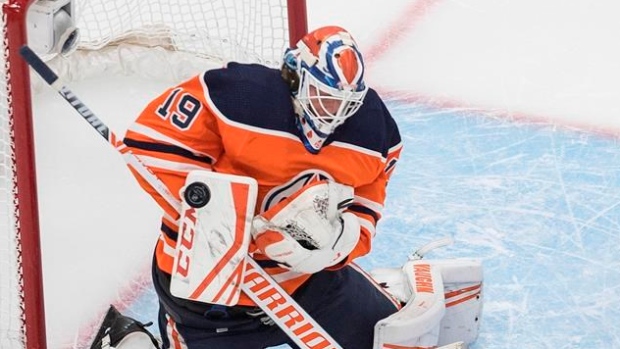 TSN.ca keeps you updated with all the latest injury news and roster updates with Ice Chips.

The Edmonton Oilers are turning to a new starting goalie for Game 2 of their qualifying-round series against the Chicago Blackhawks tonight.

Mikko Koskinen, who came on in relief of starter Mike Smith in a 6-4 loss in Game 1, will start Game 2.

Smith allowed five goals on 23 shots before he was replaced midway through the second period of Game 1.

Koskinen gave up one goal on 19 shots.

The goalies split time during the 2019-20 season, with Koskinen starting 34 games and Smith getting the nod for 37.

It will mark the first career post-season start for the 32-year-old Koskinen.

He hopes to follow in the footsteps of Columbus Blue Jackets netminder Joonas Korpisalo, who became the 14th goalie in league history to record a shutout in his post-season debut on Sunday against Toronto.

Goaltender Tuukka Rask could return to the crease on Wednesday.

Head coach Bruce Cassidy told reporters that Rask was back at practice Sunday and was feeling much better.

The netminder missed Boston's opener on Sunday because of an illness. He has subsequently tested negative for COVID-19.

Here were the Leaf lines for their practice on Monday as per the team:

Winnipeg is going to be a little shorthanded on Sunday.

Mark Scheifele, Patrik Laine and Mason Appleton will be out Monday as the Jets take on the Calgary Flames in Game 2.

Gabriel Bourque, Jansen Harkins and Logan Shaw were on the ice for warmup Monday.

Here are the lines according to TSN 1290's Brian Munz: