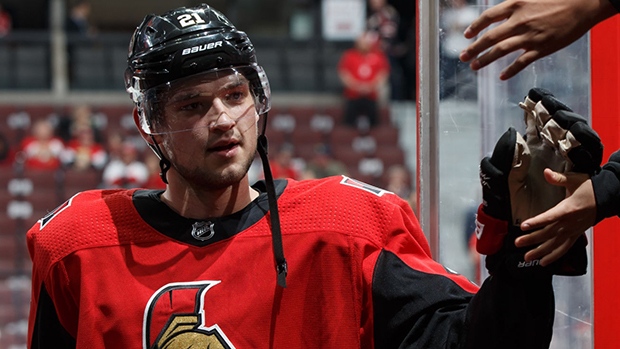 Brown is without an assist in two games with the AHL team this season, while Gustavsson turned aside 25 of 26 shots for a win his lone start with the Belleville Senators this season.

The Senators also recalled defenceman Braydon Coburn from their taxi squad and recalled forward Clark Bishop and goaltender Kevin Mandolese from the AHL to serve on the taxi squad.

Coburn will dress Monday night against the Calgary Flames, head coach DJ Smith confirmed, with Erik Brannstrom exiting the lineup. Brannstrom is expected to draw back in Tuesday.

1/2 Roster update: The #Sens have made the following roster moves:

D Braydon Coburn has been recalled from the team's taxi squad.

C Logan Brown and G Filip Gustavsson have been re-assigned to @BellevilleSens.

2/2 Roster update: The #Sens have made the following roster moves:

C Clark Bishop and G Kevin Mandolese have been recalled from the B-Sens and re-assigned to the team's taxi squad.

The Jets used the following lines at their gameday skate on Monday:

#NHLJets lines remain the same heading in to tonight’s game vs #Canucks:

Josh Anderson was not present for Monday's practice due to a therapy day.

The team used the following lines:

Earlier, the Canadiens reassigned goaltender Michael McNiven to the Laval Rocket and recalled goaltender Charlie Lindgren to the team’s Taxi squad on Monday.

The Canadiens have reassigned goaltender Michael McNiven to the Laval Rocket and recalled goaltender Charlie Lindgren to the team’s Taxi squad.

Forward Leon Draisaitl was on the ice for Monday's morning skate. Recently, the 25-year-old has been taking sessions off.

Draisaitl on the ice for morning skate today. Had been taking a few skates off recently, likely nursing something.

Defenceman Evan Bouchard practice on the third pairing on the left side of Ethan Bear after being a healthy scratch. Here are the rest of the Oilers' defensive pairings.

Goaltender Thatcher Demko will start for the Canucks Monday against the Winnipeg Jets.

Chris Driedger will start in net Monday against the Carolina Hurricanes.

Noel Acciari will draw back into the lineup, while Anthony Duclair is out with a lower-body injury.

• Acciari is back in tonight
• Driedger is in net
• Duclair is out (lower body)#CARvsFLA pic.twitter.com/8NUOXl2A8B

Forward Brett Connolly, who was waived on Sunday, was not claimed by the 12pm deadline Monday.

The team also agreed to terms on a two-year entry-level contract with Logan Hutsko.

We have agreed to terms with 2018 draft pick Logan Hutsko on a two-year, entry-level contract beginning in the 2021-22 season!https://t.co/xWdBqq0B5F

Stars forward Alexander Radulov (lower body) was on the ice for practice on Monday.

The 34-year-old has not played since Feb. 4 against the Columbus Blue Jackets. The veteran has three goals and eight assists in eight games this season.

The team also signed forward Mavrik Bourque to a three-year, entry-level contract. The 19-year-old was originally selected by Dallas in the first round (30th overall) of the 2020 NHL Draft.

The 19-year-old was selected by Dallas in the first round of the 2020 NHL Draft.#GoStars https://t.co/wyIFBVSCND

Per #NYR Coach Quinn, Filip Chytil will be a game-time decision tomorrow vs. BUF. Anthony Bitetto is day-to-day (lower body).

#Preds have activated forward Mathieu Olivier from Injured Reserve and reassigned him to the taxi squad.

Former Maple Leafs prospect Dakota Joshua will make his NHL debut for the Blues against the Anaheim Ducks. The Blues acquired Joshua in a trade with the Leafs in July 2019. He was originally selected 128th overall in the 2014 NHL Draft.

Dakota Joshua will make his NHL debut with the Blues tonight. https://t.co/mcy5m0JIFc #stlblues

The Blues have signed goaltender Colten Ellis to a three-year entry-level contract that will begin in the 2021-22 season.

Goalie @coltenellis29 has signed a three-year entry-level contract with the Blues that will begin with the 2021-22 season. https://t.co/mTt3PnkOBt #stlblues

Ducks defenceman Hampus Lindholm (undisclosed) will not play tonight vs. the Blues and is listed as day-to-day. Josh Mahura will take his spot in the lineup.

INJURY NEWS: Per Dallas Eakins, defenseman Hampus Lindholm is out tonight vs. St. Louis and listed as day-to-day. He will be replaced in the lineup by Josh Mahura.

Forward Samuel Morin has been loaned from the taxi squad to the Lehigh Valley Phantoms of the AHL.

Transaction: We have loaned forward Samuel Morin from the Taxi Squad to the @LVPhantoms (AHL).