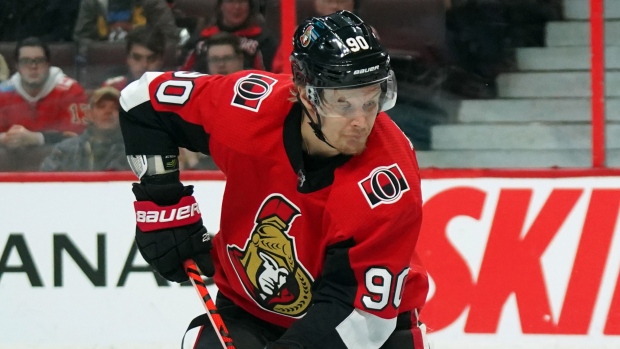 Vladislav Namestnikov will be held of the lineup as the NHL trade deadline looms.

Namestikov will be a healthy scratch for the second straight game as the Sens protect an asset ahead of Monday's NHL trade deadline. He has 13 goals 12 assists in 56 games this season.

The Edmonton Oilers assigned both forward Colby Cave and defenceman Evan Bouchard to their AHL affiliate, the Bakersfield Condors.

The 25 year-old Cave previously spent time with the Boston Bruins before being claimed off waivers by the Edmonton Oilers. This season, the North Battleford, Sask. native has spent 11 games with the Oilers recording one point. With the Bakersfield
Condors, Cave has 20 points in 40 games.

Though he was recalled by the Oilers from the Condors on February 19th, defenceman Evan Bouchard did not appear in any games. The 20-year old from Oakville, Ont. has recorded 33 points in 50 AHL games with the Condors this season.

The Pittsburgh Penguins released their lineup on Twitter with a notable absence being Dominik Kahun.

Khaun was injured in the second game of a home-and-home with the Toronto Maple Leafs.

Roster move: We have loaned defenseman Mark Friedman back to the @LVPhantoms (AHL).

The 24-year old from Toronto was initially called up by the Flyers on February 15th and played six games with the Flyers. In those six games, he recorded a single assist. During his time with the Phantoms this season, Friedman has appeared in 24 games registering three goals and 12 assists for 15 points.

The Columbus Blue Jackets have recalled defenceman Gabriel Carlsson from the Cleveland Monsters.

The Arizona Coyotes have assigned goaltender Darcy Kuemper to their AHL affiliate, Tuscon Roadrunners for conditioning.

The 29-year old from Saskatoon has appeared in 25 games for the Coyotes this season putting up a 15-8 record with two shutouts across that span. Kuemper currently sits sixth in the NHL in save percentage with .929 and third in the NHL in goals against average with 2.17.

The Los Angeles Kings announced that they have extended forward Martin Frk.

The LA Kings signed Martin Frk to a two-year contract extension through the 2021-22 season.
https://t.co/yBhqBv9IWL

The 26-year old from Pelhrimove, Czech Republic., was selected by the Detroit Red Wings with the 49th overall pick in the 20120 NHL draft. Since his draft year, Frk spent the majority of his hockey career splitting time between the AHL and ECHL with multiple teams before landing with the Kings. The AHL's hardest shooter was recalled by the Kings on February 12th and has since recorded six points in eight games.

We have recalled Logan O’Connor from the Colorado Eagles. #GoAvsGo pic.twitter.com/MI6NQUWHvf

The 23-year old from Missouri City, Tex., has played seven games with the NHL's Avalanche, recording one point in seven games. With the Colorado Eagles, O'Connor has recorded 25 points in 40 games.