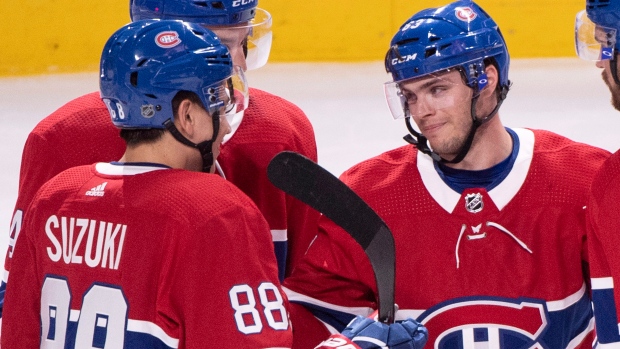 Canadiens forward Matthew Peca will miss the next six weeks with a knee injury.

The Canadiens have issued a medical update on the status of Matthew Peca.#GoHabsGo https://t.co/LJQLHDYtov

Peca sustained the injury Dec. 10 against the Pittsburgh Penguins.

The 26-year-old has skated in four games for the Habs and has not registered a point.

Canadiens forward Ryan Poehling has been assigned to the Laval Rocket of the AHL.

The Canadiens have reassigned Ryan Poehling to the AHL’s Laval Rocket. #GoHabsGo

The  20-year-old has skated in five games for the Habs this season and has not registered a point.

He has five goals and seven assists in 26 games for the Rocket this season.

Frederik Andersen will get the start in net.

Mathew Tkachuk is skating today after not playing Tuesday night against Arizona.

Red Wings head coach Jeff Blashill has announced that the team will be without forward Andreas Athanasiou for tonight's game against the Winnipeg Jets.

Per Blashill, Athanasiou out, Larkin (not feeling well) questionable for tonight. #RedWings

The Red Wings have recalled forwards Filip Zadina and defenceman Dylan McIlrath from the Grand Rapids Griffins of the AHL.

McIlrath has played in 16 games for Detroit this season without a point.

The Blues have announced that forward Oskar Sundqvist will return to the lineup tonight when St. Louis faces the Vegas Golden Knights.

Oskar Sundqvist will return to the lineup tonight after missing six games with a lower-body injury. https://t.co/c9AEX9TYVy #stlblues

The 25-year-old has skated in 26 games for the Blues this season, scoring eight goals and adding four assists.

The Penguins have recalled forward Joseph Blandisi on an emergency basis.

The Penguins have recalled forward Joseph Blandisi on an emergency basis from the @WBSPenguins.

The 25-year-old has played in 11 games for the Penguins this season scoring once and adding two assists.

The Blackhawks have announced that defenceman Calvin de Haan has been placed on the Injured Reserve.

The 28-year-old will miss at least the next three games.

In 29 games skated, de Haan has one goal and five assists.

Demko suffered a concussion at practice yesterday and DiPietro has been recalled, said Coach Green.

Demko has played in 12 games this season, posting seven wins and four losses with a 3.00 GGA and a .906 save percentage.

Michael DiPietro has been recalled for the injured Demko.