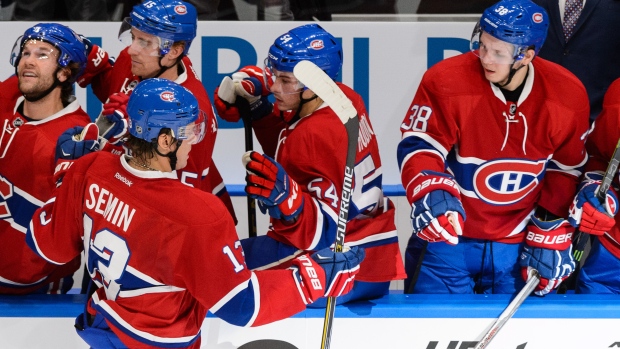 Forward Zemgus Girgensons will miss at least the next two games to an upper-body injury. The 21-year-old missed Tuesday's game against the Dallas Stars due to the injury, which he suffered Saturday against the San Jose Sharks. - The Buffalo News.

Free agent Tim Gleason will practice with the team starting on Wednesday, in hopes of gaining an NHL contract. Gleason scored one goal and added six assists in 55 games with the Hurricanes last season. - Team Website.

Winger Josh Anderson has been recalled to the NHL. - Blue Jackets Website

Peter Mrazek will make his 11th start of the season tonight against the Washington Capitals. - Team Twitter.

Price is taking part in his first full practice with the team since sustaining his lower body injury. Mike Condon will still get the start Thursday for the Habs against the Arizona Coyotes.

Semin is not attached to a regular line after he was benched for most of the third period in Monday's win over Vancouver. He will not play Thursday night against the Coyotes, says head coach Michel Therrien.

Forward Tyler Kennedy has agreed to a professional tryout. He had a PTO with the club for training camp, but was released due to a personal issue. - Team Twitter

Absent with an upper body injury on Tuesday, Nick Spaling participated in practice. His status for Friday remains in question. - Jonas Siegel, TSN

The team has recalled forward Alex Grenier from the AHL and sent down forward Hunter Shinkaruk. - Team Release