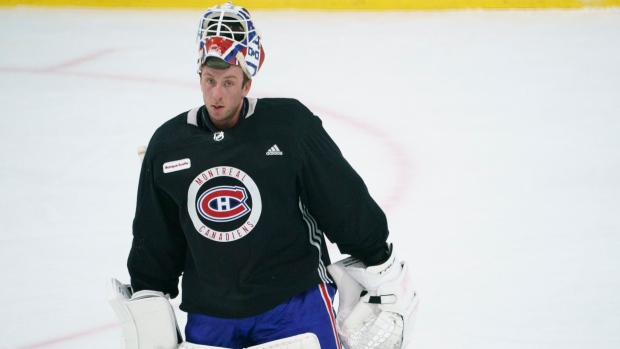 Forward Patrik Laine will not play Monday against the Toronto Maple Leafs, he's listed as day-to-day with an upper-body injury. Laine was on the ice ahead of Jets' practice again on Sunday, but once again left before full practice started.

Patrik Laine, who left practice early with an undisclosed issue yesterday, is on the ice at Jets morning skate

Patrik Laine on the ice only briefly ... departs before Maurice whistled it to start

It was an optional skate Monday but there are no projected changes to lineup. Romanov returns from taxi squad (paper transaction) to play:

Julien said Jake Allen’s first Montreal start coming in the third game of the season was part of the coaching staff’s plan to get the new backup some work early in the season so he can immediately start sharing the workload with Price. Julien added they want to make sure Allen gets his fair share. Julien expanded on his goaltending big picture by saying have a plan for the season as a whole but adjust it week by week. Going back to last Saturday’s win over Edmonton, the Canadiens will play five games in eight days. After tonight, they will face Vancouver three times between Wednesday through Saturday.

They consider this good news after initial fears

Robertson left Saturday's game against the Ottawa Senators after the first period and didn't return to action.

Forward Pierre Engvall was reassigned from the AHL's Toronto Marlies to the Taxi squad on Monday.

Engvall had eight goals and 15 points in 48 games with the Leafs last season.

#Leafs confirm Pierre Engvall has been reassigned from the Marlies to the Taxi/SRS squad.

The Leafs will go with seven defencemen Monday against the Winnipeg Jets, with Mikko Lehtonen making his NHL debut.

Mikko Lehtonen makes his NHL debut ... will be on the PP

Jason Spezza was on the ice for the team's morning skate after being placed on waivers Sunday, skating as the fourth-line centre.

Adam Brooks skated in a regular white sweater today at the team's morning skate, while Travis Boyd, Pierre Engvall and Alexander Barabanov were in taxi-squad grey.

The team used the following lines during Monday's skate:

Ethan Bear will be scratched for Monday's game against the Montreal Canadiens. He played all 71 games last season and led all rookie defencemen in the league in ice time. He also played over 23 minutes in the first two games this year.

Green says he is anticipating that Hughes will play tonight and skate later this morning.
Also expects that Miller will play quite a bit tonight. #Canucks @TSN1040 @TSNHockey

Colin White was back skating on the fifth line at practice Monday. He was a healthy scratch in the Senators' season opener before playing Saturday in the second game of the back-to-backs with the Leafs. Artem Anisimov was back in the fourth line centre spot Monday.

Forward Patrik Laine was on the ice ahead of Jets' practice again on Sunday, but once again left before full practice started.

Patrik Laine, who left practice early with an undisclosed issue yesterday, is on the ice at Jets morning skate

Patrik Laine on the ice only briefly ... departs before Maurice whistled it to start

The team sent the following tweet on their projected line's for their afternoon matchup against the Columbus Blue Jackets.

Sergei Bobrovsky will make his season debut Tuesday against the Chicago Blackhawks after missing a chunk of training camp while on the Unfit to Play list.

Noah Juulsen, whom the Panthers claimed off waivers from the Montreal Canadiens prior to the start of the regular season, joined the Panthers for practice for the first time Monday.

Head coach Barry Trotz said goalie Semyon Varlamov is available to play Monday against the Boston Bruins. Varlamov was injured Saturday when he took a puck near the throat ahead of the Islanders' game against the New York Rangers. Ilya Sorokin started the game in his place.

“Ilya and Varlamov are both available.”