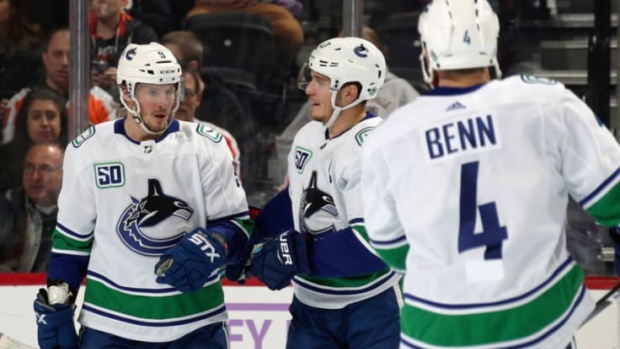 Canucks defenceman Jordie Benn, who was placed on the NHL's COVID-19 list before the start of the season alongside J.T. Miller, skated with the team on Wednesday. Head coach Travis Green said Benn is available, but it doesn't appear he'll play tonight against the Montreal Canadiens. The 33-year had one goal and six assists over 44 games with Vancouver in 2019-20, his first year with the club. - Farhan Lalji

Star forward Patrik Laine was the first member of the Jets on the ice for Wednesday's optional skate. The 22-year-old has missed the last two games with an upper-body injury. - Brent Wallace

#jets Patrik Laine the 1st player on the ice for Winnipeg’s optional skate this afternoon in Ottawa. pic.twitter.com/SbRlvw4t8v

The team announced on Twitter that forward Dillon Dube is sidelined day-to-day with a lower-body injury while forward Matthew Tkachuk did not practice on Wednesday due to it being a maintenance day.

Sens star rookie Tim Stutzle, who missed Tuesday's overtime loss to the Winnipeg Jets with a minor injury, did not attend practice on Wednesday. He's considered day-to-day and is doubtful for Thursday's rematch against the Jets.

Mikko Koskinen will get the start between for the Oilers when they battle the Maple Leafs in Toronto on Wednesday night. The 32-year-old is 1-3 on the season with a 3.80 goals-against average.

Bruins star forward David Pastrnak, who hasn't played yet this season due to off-season hip surgery, practiced with his team on Wednesday wearing a non-contact jersey. The 24-year-old scored 48 goals and 47 assists over 70 games last season. He's expected to return to the lineup sometime in early to mid February. - Fluto Shinzawa

David Pastrnak (non contact) is practicing with the team.

The Panthers have reassigned goaltender Sam Montembeault to the AHL's Syracuse Crunch and loaned defenceman Riley Stillman to the taxi squad.

Transaction: #FlaPanthers G Sam Montembeault has been reassigned to @SyracuseCrunch. #FlaPanthers Riley Stillman has been loaned to the FLA taxi squad.