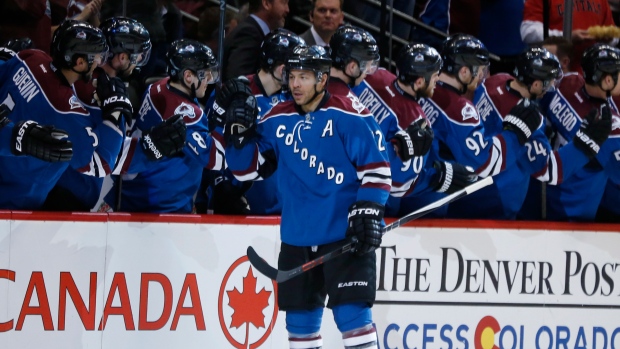 DENVER - Semyon Varlamov stretched for pucks, dived, pushed off on his skate, had players land on top of him and even did the splits a couple of times.

So, yep, that tweaked groin really is just fine.

Jarome Iginla scored in the second period and got the decisive goal in the shootout, Varlamov stopped 23 shots and the Colorado Avalanche beat the New Jersey Devils 2-1 on Thursday night.

Varlamov recently hurt his groin and sat out against Los Angeles on Tuesday, snapping his streak of 22 straight starts. The injury hardly slowed him in net, though, especially in the shootout when he stopped two of three shooters, including Patrik Elias to seal the win.

That's an encouraging sign heading into the stretch run. The Avs are now 1-1 on a pivotal three-game homestand as they try to remain in the playoff picture. They trail the Kings by six points for the final wild-card spot in the Western Conference with 14 games remaining.

"There are lots of points to be had. We are just going to keep focusing on ourselves and keep trying to find ways to win games," Iginla said. "Varly played great. Kept us in there. We were fortunate because of his saves."

The Devils could say the same thing about Cory Schneider, who stopped 28 shots.

"That is a dangerous team," Schneider said. "They come at you."

Iginla beat Schneider with a wrist shot through the pads on the winner. Ryan O'Reilly also scored in the shootout for Colorado. Jacob Josefson was the only one to beat Varlamov in the shootout.

"(Varlamov) stood on his head for us," Avs forward John Mitchell said. "He's been doing it all year and we're going to need him down the stretch, too."

Schneider and Varlamov traded fantastic saves in overtime. Schneider came up big by stopping Alex Tanguay's breakaway opportunity. Moments later, Varlamov made a glove save on a shot by Jon Merrill.

"When it's 1-1 in the third, you need some saves from your goalie. I got them," Schneider said. "Not enough in the shootout."

Iginla gave Colorado the lead at 2:27 of the second when he gobbled up a loose puck in front of the net and lifted a shot over Schneider. It was Iginla's 582nd career goal in his 1,378th NHL game, which ties him with Joe Sakic, Vincent Damphousse and Dean Prentice for 40th place on the NHL's games played list.

The lead didn't last as Andy Greene tied the game at 14:12 when he lined a shot from the blue line. The puck was heading wide of the net, but appeared to hit off defenceman Zach Redmond and ricochet past Varlamov.

From there, Schneider took control. He stopped Daniel Briere down low with his stick and then denied Matt Duchene by sitting on the puck. Schneider even took a quick look behind him to make sure the puck didn't trickle in for a goal.

The Devils tested Varlamov early and often in the first period as they outshot the Avalanche by a 13-3 margin. Elias had the best chance when he got free at the blue line and skated in on Varlamov, only to send a wrist shot over the net.

"I guess the guys wanted to make sure he was ready, giving him some good chances in the first," Avalanche coach Patrick Roy joked. "He was phenomenal in the first.

"In second and third, our legs got better. We started playing a lot better hockey."

There was a moment of concern for New Jersey when defenceman Jan Hejda tripped Mike Cammalleri late in the opening period and the left winger slid hard into the boards behind the goal. Cammalleri briefly went to the locker room before returning to the bench.

"We liked a lot of things about our game tonight, but the first thing that comes to mind is I liked our compete (level) and work ethic," Cammalleri said. "I thought there was a consistency through our lineup as far as our commitment and that's key."

NOTES: New Jersey forwards Martin Havlat and Michael Ryder were scratches. ... With Varlamov feeling better, Roy said the plan is to send backup Calvin Pickard to Lake Erie of the American Hockey League. ... Colorado is 8-2-0 in its blue jerseys this year. ... Varlamov is now 6-3 this season and 24-14 in his career in shootouts.