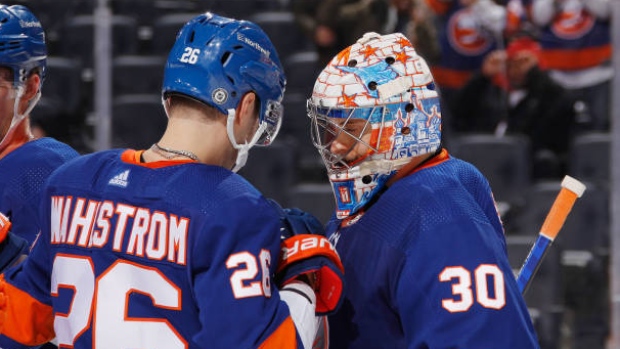 Scott Mayfield had a goal and an assist, and Austin Czarnik also scored to help the Islanders get their third straight win and seventh in their last nine (7-1-1).

Sorokin got his sixth win in his last eight starts and has only allowed 15 goals over that stretch. The 26-year-old goaltender is 11-7-5 in his second NHL season.

Scott Wedgewood finished with 31 saves but the Coyotes snapped a two-game winning streak in the second of a four-game trip. Arizona failed to score in both meetings against New York this season, losing 3-0 at home on Oct. 23.

Mayfield opened the scoring with 6:09 left in the first on a slap shot from the point in which Lee screened Wedgewood. Mathew Barzal got a loose puck off an offensive zone face off and danced around Nick Schmaltz before getting the puck back to Adam Pelech who eventually set up Mayfield.

The Islanders doubled their lead 2:58 later as Mayfield sent a cross-ice pass to Czarnik for an easy tap-in near the back post. Islanders captain Anders Lee also picked up an assist on the play.

New York improved to 12-4-4 when scoring the first goal and outshot the lifeless Coyotes 35-17.

Nelson sealed the victory when he scored his 12th and 13th goals of the season in the third. First, he gathered a bouncing puck and fired a wrist shot past Wedgewood at 1:22. Then, midway through the period, Nelson crashed the net and finished a pass from Anthony Beauvillier. The play was reviewed, but the original call of a good goal stood.

The Islanders improved to 7-1-1 in their last nine at UBS Arena after starting 0-5-2 at their $1.2 billion new home. New York began the season on a 13-game road trip, tying an NHL record, as the construction on the venue was completed. New York also recorded its eighth straight win on home ice against Arizona.

The Islanders are 12-2-2 when they score at least three goals, including shootout winners. Under Barry Trotz, the Isles are 100-11-13 when scoring three or more.

Mayfield skated in his 121st consecutive game and is one of three Islanders — along with Cal Clutterbuck and Zach Parise — to participate in every game during the 2021-22 regular season.

Coyotes: At the New York Rangers on Saturday night.