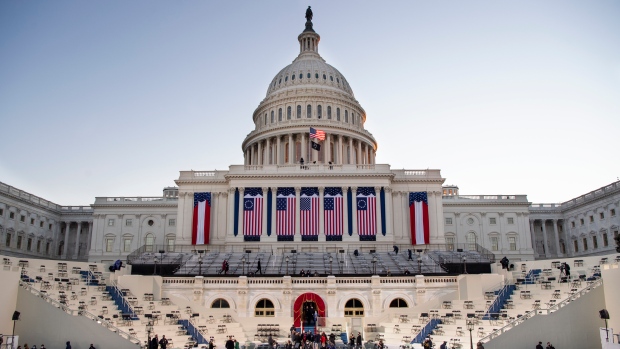 It's a historic day south of the border. Not only does Wednesday mark the official end to Donald Trump's presidency, but what many hope is a new era for the United States under the leadership of Joe Biden and Kamala Harris. Here are some reactions from the world of sports on a historic Jan. 20.

Golden State Warriors star Steph Curry praises 22-year-old Amanda Gorman, who read an inspiring rendition of 'The Hill We Climb' as the youngest inaugural poet ever.

Former WNBA superstar Tamika Catchings congratulates Joe Biden and Kamala Harris, who were sworn in as president and vice president of the United States just moments ago.

History has officially been set in stone! Congrats to Joe Biden & Kamala Harris! This new era of presidency will be challenged to bring necessary change to our nation, and I look forward to seeing what this historical presidency will bring! #BidenHarris pic.twitter.com/CSOdwXnqu8

A native of Oakland, Calif., Harris will become the first female, first Black and first South Asian vice president of the United States.

The Warriors released a touching tribute to Harris Wednesday morning and gifted her a special No. 49 city edition jersey with her name on the back.

"I'm not saying that you've got to put this up in your office at the White House, but it probably would be a good idea," said Steph Curry in the video.

"I will proudly, proudly display this in the office of the vice president of the United States, an office I am about to occupy," Harris said.

The Warriors will be wearing those same Oakland inspired jerseys as they take the court Wednesday night against the San Antonio Spurs.

Sports world must continue to push for change

Sports are all about resilience in the face of adversity and pushing through difficulty, Shireen Ahmed writes, and fighting injustice is no different. But we cannot be misled to think that we can pull back and relax now that Trump is out of office.

Vanderbilt kicker Sarah Fuller -- who made history last year as the first woman to play in a Power 5 football game -- announced last week that she will participate in  presidential inauguration on Wednesday, calling it “an honor to be invited to participate in one of America’s great traditions.”

It’s an honor to be invited to participate in one of America’s greatest traditions. This historic inauguration is especially meaningful for American women and girls. The glass ceilings are breaking and it is the time to #LeadLikeAWoman @KamalaHarris @JoeBiden @BidenInaugural pic.twitter.com/16izLbIqEu

Lopez is scheduled to perform later on Wednesday.

Biden looking to sports for reunification

"Through personal tragedy, a 36-year Senate career and two terms as vice president, Joe Biden has viewed athletes and athletic competition as sources of virtue, uplift and common ground. He credits sports with instilling the confidence to overcome his stutter and, at times, delivering his own family a sense of healing."

Click here to read the story from ESPN's Michael A. Fletcher.

Former Toronto Blue Jay and current New York Mets starter Marcus Stroman shared his thoughts on what Inauguration Day means to him, calling it a "great day for the country."

What a great day for the country.

Time for healing and love over hate.