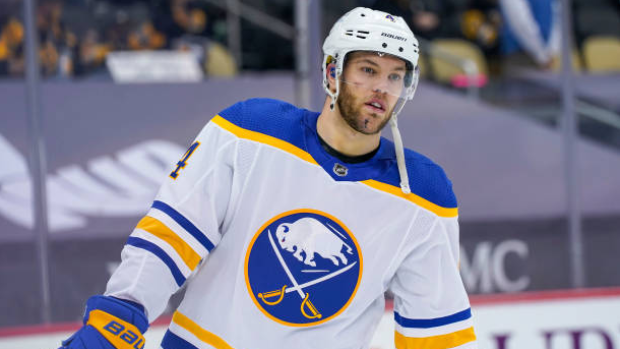 Taylor Hall may not be a Buffalo Saber for much longer.

Some hard work getting done today in Buffalo. Sources indicate a Taylor Hall trade is getting close at this point.

It’s believed 3 teams remain in the mix for Hall. https://t.co/cIDV7YNGxp

"Some hard work getting done today in Buffalo. Sources indicate a Taylor Hall trade is getting close at this point," tweets TSN Hockey Insider Darren Dreger, who adds it is believed three teams remain in the mix for the veteran forward.

As expected, don’t believe the Oilers are in the mix on Taylor Hall at this point. Much speculated in recent months but again, Oilers are dollar in, dollar out and not looking to move picks.

TSN's Ryan Rishaug tweets he doesn't believe the Edmonton Oilers are in the mic for Hall at this point. Although there has been speculation in recent months, Rishaug reports the Oilers are dollar in, dollar our and not looking to move draft picks.

Hall was an unrestricted free agent coming off an effective 2019-20 season but elected for a short-term deal with the Sabres in October, reaching a one-year, $8 million pact to form what many anticipated would be a high-powered offensive duo alongside Jack Eichel.

But the Sabres (9-25-6) were sidelined earlier in the season with COVID-19 issues and struggled mightily in the first half of the season, ultimately sending Hall's name back in the rumour mill.

The 29-year-old has two goals and 17 assists in 37 games so far this season. Hall has not played since April 3.