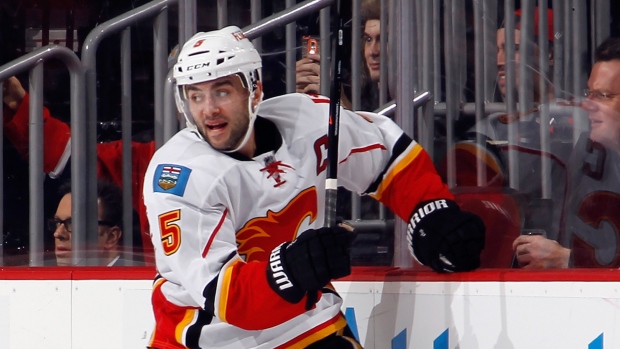 CALGARY - Mark Giordano insisted just over a month ago the Flames could be a playoff team without him. The captain then stood aside and watched it happen.

When Calgary's top defenceman, top scorer and a Norris Trophy candidate at the time underwent season-ending surgery on a torn left bicep March 4, it was considered by many the death knell to the club's playoff aspirations.

But Calgary went 12-6-3 after their captain was forced from the lineup to claim third in the Pacific Division. The Flames (45-30-7) are a playoff team for the first time in six years.

They open their first-round series Wednesday in Vancouver against the Canucks.

"I truly believed, and I think our whole teams has, it hasn't been about individuals," Giordano said. "The way our team plays and our system, that allows for a lot of different, good individual stories this year. But we've really all bought in.

"That's why one or two guys going out of our lineup hasn't really affected us all year. We deserve to be in playoffs, so it's a rewarding feeling."

Giordano skated prior to Flames practice Monday, but it was more hope than concrete possibility that he'll return to the lineup during the post-season.

"I've got to meet with the surgeon a bunch of more times before that becomes a reality," the captain cautioned. "Hopefully the rehab is going better than expected, but it's still a bit early for that. I really have to start gaining my strength and stuff back.

"Hopefully we go really deep and we have a decision to make."

"That's not anything that's weighing on our minds," the GM said. ""That's down the road a little bit. Our first priority with Mark is making sure we're staying with the program in terms of the proper rehab procedure."

Giordano had 11 goals, 37 assists and was plus-13 when he was hauled down in the third period of a Feb. 25 game against the New Jersey Devils. He was taking a slapshot to clear the puck when an opposing player's stick wedged in between his back and arm.

Giordano is one of the few Flames with playoff experience, albeit just four games back in 2007 when Calgary lost in the first round to San Jose.

The 31-year-old from Toronto inherited the 'C' following the trade of 10-year captain Jarome Iginla at the end of the 2012-13 season.

Giordano has juggled the difficult task of trying to be a leader, while not interfering with the balance the team has struck without him.

"I feel like you fall out of your routine pretty quick if you just sit at home and do nothing all day," he said. "I come to the rink. I'm trying to get better quick first of all, be in all the meetings and be around the guys.

"I just try to be an easy guy to talk to for some guys if things aren't going well. I've been around the room as much as possible. It's always tough when you're not playing.

"I like to be at all the games and with the guys and sort of get that feeling, but it's been a good ride. The last month especially has been really fun to be a part of and hopefully we can continue this."