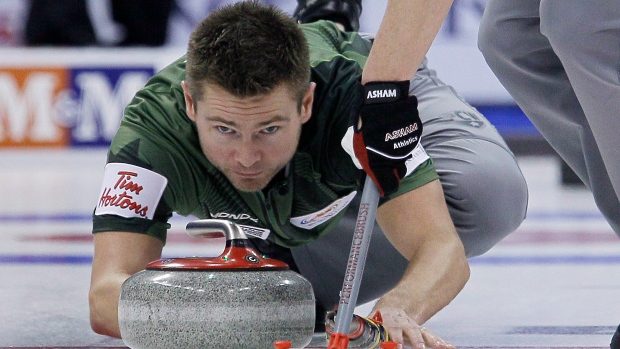 There were occasions last year when Brad Jacobs thought perhaps his front end players were losing their strength. Despite having two of the strongest and fittest curlers on the planet in Ryan and E.J. Harnden, there were games when they simply weren't able to do to a rock what their opponents could.

"There were many times last year that we just couldn't compare to the teams we were playing in how they were able to affect the rocks," said the 2014 Olympic champion. "At first I thought that maybe it had something to do with sweeping, but then I realized it couldn't be – we had two of the strongest sweepers in the game."

What Jacobs and other curlers saw has resulted in perhaps the most significant equipment controversy the Roaring Game has ever seen, with players, officials and manufacturers embroiled in heated discussion, charges of all kinds and the clear need for some new regulations.

Brouhaha? Call this a Broomhaha.

The matter began last season. As the year's World Curling Tour events played on, Jacobs and other rinks began to notice the something unusual - a couple of teams were seemingly able to control their stones, making them curl more or less, even getting them to slow down.

It didn't take long for the top players to point their fingers at the brooms being used as the magic wands that were making rocks dance. The controversy raged at the year's first event where Brad Gushue had just one sweeper scrubbing, with the belief two actually harmed what they were trying to achieve.

The brooms in question are made by Hardline Curling and have been staples for rinks skipped by Mike McEwen and Reid Carruthers since the start of last season. The two teams are sponsored by Hardline. Gushue switched to the brooms this year and also gained a sponsorship.

The devices use a head called the icePad, which features a different style of fabric. Some believe it's this fabric that is allowing these teams to manipulate the path of the stone.

It should be stressed that these brooms break no rules and are completely within the current boundaries of the game. Their manufacturer also disputes any claims that they can move rocks as if being controlled by a joystick. But whether they fit in the spirit of the sport is another matter.

The controversy came to a head at a recent tour stop in Toronto, the Stu Sells Tankard. That's when a Hardline competitor, BalancePlus, gave modified broom heads to its sponsored rinks to allow them to do what they thought was essentially the same as the Hardline models, although perhaps to a more extreme level.

It's believed that the key to being able to control the path of the stones is something called directional fabric. Move your fingers across it in one direction and it's smooth. Go the other way and it's rough. The theory goes that by varying the sweeping patterns, tiny lanes are created on the ice upon which the rock travels. Turn the broom heads another way and it can be used to slow up the rock by creating speed-bump-like ridges.

"It's making a mockery of the sport," Jacobs stated. "And curling is in a great place right now where we're showcasing the athleticism of the sport and the players. This isn't what we need."

Nolan Thiessen, lead for Team Canada and one of the most observant and passionate curlers in the game, added that the equipment shouldn't be as important as the player.

"Any advantage you get should be earned," he said. "We do a lot of work and training, and we don't want to get to a point where that doesn't matter."

Thiessen led the charge in getting most of the top teams to sign an agreement stating they wouldn't use any of the brooms in question at future World Curling Tour or Grand Slam events. A collection of 22 men's and women's rinks signed on.

That, he said, is a good short-term solution, but more needs to be done.

"This is not a broom supplier issue," said Thiessen. "It's a game issue. It's a call to action for the governing bodies."

Those governing bodies are aware, even if they aren't sure quite yet just how to proceed.

It's hard to fault Curling Canada as, unlike golf where there are strict regulations at the conformity of equipment, curling has never really needed such rules.

Peckham added that the governing body started to hear about the brooms toward the end of last year and kept a sharp eye on the situation, as well as discussing matters with the players and equipment manufacturers. It has also been working with the World Curling Federation (WCF) to determine what can be done.

"Anything we do has to be in concert with the WCF and other governing bodies," he said.

Peckham said that Curling Canada has taken some first steps, such as identifying a company that can analyze fabric.

The WCF issued a statement on Tuesday, saying it was deciding on the best way to act.

"The WCF recognises the competitive and commercial sensitivity of this matter, which is why we are carefully considering how to proceed," read the statement.

The only rule in place at the moment that would apply to any new brooms is one regarding damage to the ice. No equipment – broom or otherwise – can cause harm to the playing surface. There is debate as to whether these types of new brooms do scratch the ice – if there are any marks, they're very hard to see.

"I do," stated Jacobs when asked if he sees damage, "whether other people say they do or not."

Archie Manavian, the president of Hardline, has been fighting back against the charges that his brooms are in any way breaking the rules or the spirit of the game. He stresses that the fabric on his brooms does not have a directional design and does no damage to the ice. The patterns on his are diamond-shaped, he stated, and he is adamant that he's doing nothing wrong.

"It's really just corporate bullying," he stated. "We're paying the price for having a superior product.

He added that his competitors are trying to get his brooms off the market.

"Those other heads were made for the sole purpose of getting our guys to stop using the icePad," Manavian said of the other broom heads used at the Toronto event. "Our guys were handcuffed."

Manavian added that the news has also cost him business, with several pro shops cancelling order for his product.

Scott Taylor of BalancePlus said he began hearing about the new brooms and their apparent ability to control rocks from his company's sponsored players and began investigating.

His team did some testing on sample broom heads it made up and recorded the results, which were nothing short of shocking. Using a machine to throw two rocks with equal force and turn, the unswept stone curled six feet while one swept with directional fabric fell (went against the curl) four feet – a difference of 10 feet.

He admitted that the broom heads he gave his teams for the event in Toronto were in part to make a statement about what was currently available as much as it was to level the playing field.

"If that's where curling is going, then okay," said Taylor, "But BalancePlus believes it's bad for the game."

Thiessen said he believes the agreement with the top teams will hold for Tour events, but isn't sure what will transpire when play for the Tim Hortons Brier begins.

"It will be interesting to see what happens when playdowns begin," he stated. "You might get a team [that hasn't signed the agreement] using the brooms against one that's signed on. No one wants to be at a disadvantage."

The broom issue needs to be settled prior to that or risk giving some teams a path to the top of the world that others can't follow.