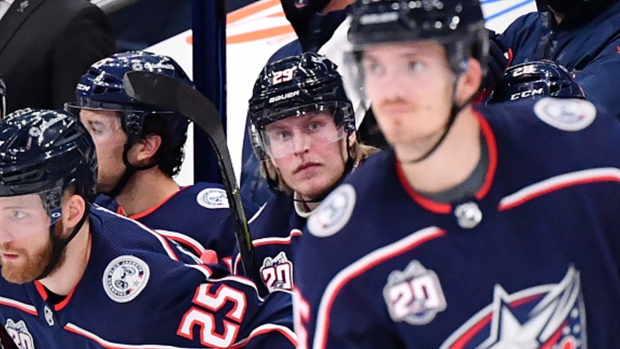 I'm not sure what the over/under was on number of games it would take Patrik Laine to get into Columbus Blue Jackets head coach John Tortorella's doghouse, but it had to be higher than four. Is this just a continuation of the Pierre-Luc Dubois situation where no matter who you are, if you don't play the way Torts wants you to play, you will sit?

LeBrun: I think that's fair and by the way, I think Amazon is spending the season with the wrong team behind the scenes, the action's in Columbus. That's exactly what it is: Tortorella doesn't care what the name on your jersey is, if you're not doing what he believes is within the team's structure, he will bench you. I asked Blue Jackets GM Jarmo Kekäläinen for a reaction to what happened, he said "no comment." I think those discussions are being handled internally, but it's been an eventful year. And let's remember, Tortorella is in the final year of his contract; a situation to monitor.

A lot of entire teams are benched right now because of COVID-19, with the Flyers joining that list and three more games postponed on Tuesday. What more can the NHL do going forward?

Dreger: There's ongoing dialogue with the NHLPA on further enhanced protocols. They just did that recently, and they feel obligated to do it again, especially with the teams in the United States. When you look at some of the things being discussed, you talk about reducing player interactions away from their home arena, so that means in their home environment. Regular testing of family or household members. Rapid testing of these teams on game days, and perhaps most interesting is the use of genetic sequencing to understand the precise types of COVID-19 the players are contracting, and the most likely means of contraction. They're also looking at perhaps updating mask requirements. Nothing finalized, still ongoing dialogue.

Seravalli: We're now just 10 days away from the NHL outdoor game at Lake Tahoe and there's no question that eyebrows are being raised in the league office with two more Flyers players being added to the COVID-19 list on Tuesday. I'm told at this point that they haven't really set any contingency plans in motion yet, certainly haven't brought anything to the NHLPA. There are all sorts of different options on the table. What the NHL ends up doing will be dictated by medical protocols, not any sort of special event that they have in mind with Lake Tahoe.

Speaking of COVID-19, new GM Ron Hextall, before he can join the Pittsburgh Penguins in their cohort, he's going to have to quarantine and undergo a number of negative tests. I believe he's joining the team from Florida so he may have to sit out for a bit.