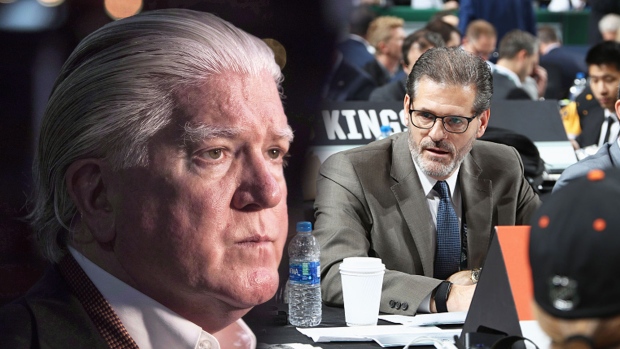 Pittsburgh has acted fast in finding a replacement for Jim Rutherford, hiring Ron Hextall as the team's new general manager and Brian Burke as President of Hockey Operations. The TSN Hockey Insiders have the latest on how the Penguins came to their decision, who the other candidates in the search were, and what's next for the Pens.

We knew the Pittsburgh Penguins would have to act quickly in a season where one month in also means only three months left. They decided on two familiar, experienced, and recognizable names in Ron Hextall as general manager and Brian Burke as president of hockey operations. How did they come to that decision?

LeBrun: The Hextall part is a little more traditional. They were pretty determined on hiring him from the get-go. After his first interview last Thursday they were sold on him even though there was a second interview on Monday.

The more interesting part in a way is the Burke addition here because that came after the fact they wanted to hire Hextall. Burke had been used as a sounding board by David Morehouse, the Peguins’ CEO, and this past weekend, the Penguins said, ‘let's see if he wants to join us too’ which surprised Burke. But the point is they had to go back to Hextall and ask, ‘are you comfortable with this, brining on Burke as well?’ And we obviously know what the answer to that was. No. 2, these two guys they brought in have to be comfortable with what Morehouse and owner Mario Lemieux want, which is, ‘we're not ready to rebuild here, we want to go win another Stanley Cup.’ And obviously both guys are.

Seravalli: We know that Burke got the president of hockey ops job but who else were the Penguins talking to? This was always going to be a dual job that they were hiring for, GM and in addition to that, some kind of senior adviser. And I'm told that Kevin Weekes was the one candidate that the Penguins had circled before they pivoted to Burke. And Weekes has now interviewed with five separate NHL franchises for a similar type role. It's pretty clear that Weekes, the NHL Network analyst, is knocking on the door for one of these jobs.

And now the question goes from who will run the Pens to what will they do? You heard Pierre say they still want to compete for a Stanley Cup. Dreger, you reported and raised some eyebrows a couple weeks ago that there's a possibility that Sidney Crosby and Evgeni Malkin wouldn’t finish their careers in Pittsburgh. How does the Hextall and Burke hirings influence that?

Dreger: It depends on the conversations they have to have with Crosby, to some degree Malkin, and maybe Kris Letang fits into that conversation as well. They have to examine the current roster; what are the holes in this lineup? How confident are Hextall and Burke that they're going to be able to plug those holes to make the Penguins a true Stanley Cup contender? Again, many believe the window is closing; they have to have that conversation. I’m sure it will happen in the short term and then perhaps again in the off-season looking forward.

Seravalli: I think we're all intrigued to see how Hextall shapes this Penguins roster, but how will he fill out his staff? I'd be shocked if he doesn't bring Chris Pryor, the Nashville Predators scout, with him. Pryor was his right arm in Philadelphia, the man responsible for so many of the Flyers draft picks that you now see on the ice. And one other name to keep an eye on is Patrick Burke, the senior director of the department of player safety for the NHL. Yes, he's Brian Burke's son, but he previously worked for Pryor and the Flyers and he's a guy that's interviewed for a number of assistant GM openings around the league.