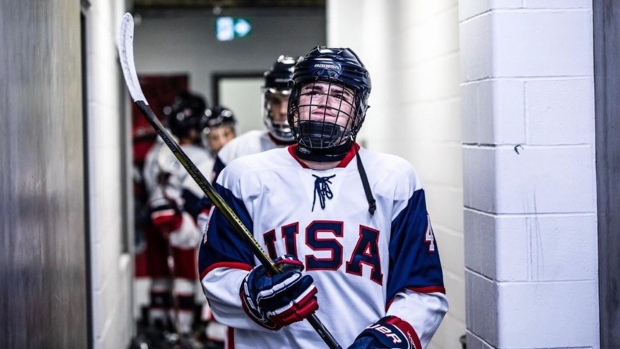 The TSN Hockey Insiders discuss the surfaced report of bullying and racism from Coyotes prospect Mitchell Miller, and reveal that at least one third of NHL teams knew of his past behaviour and had scratched him off their draft list. The Insiders also discuss how Miller remains a candidate to play for Team USA at the World Juniors and much more.

Frank Seravalli: What we’ve learned is that this was not a secret among NHL scouting circles. I’m told that at least one third of the NHL’s teams, if not more, had scratched Miller off of their draft lists heading into the draft, saying at no point were they willing to draft Miller in any of the NHL’s rounds. In recent days we’ve seen the Arizona Coyotes and the University of North Dakota show their support for Miller but what does that mean in terms of his chances to represent Team USA at the World Junior Championship? Miller was part of their most recent evaluation camp, and I’m told he remains a candidate to represent Team USA in Edmonton over the holidays. A USA Hockey official told me today that they had been well aware of Miller’s past conduct and his behavior is indeed reprehensible. They feel that no kid should go through what Isaiah Meyer-Crothers has gone through, but at the same time, USA Hockey feels that there should be a path for all kids to make their way back.

Pierre LeBrun: It was a lengthy meeting. It was the first executive board meeting since June when they spearheaded the vote on the new CBA. Of course, the executive board is all 31 player reps. They’ve got a lot of questions, but unfortunately, I don’t know how many answers they’re going to get. So, this meeting is the PA’s version of the GM meetings last week for the league, and it is short on answers because there’s still so much work and many meetings that have to be had to determine the 2020-21 season. I’ll stress once again that the joint committee of the PA and the league have not yet met to begin proceedings on figuring out what this upcoming season will look like. After this executive board meeting there are also going to be team by team meetings held by the NHLPA throughout the week so that all 700-plus players get to ask questions, and there are a whole lot of questions. When do they move back to their NHL cities? What about schools for their kids and their families? A lot of pertinent questions for players regarding the 2020-21 season, which is still really an unknown.

How likely is a Canadian division next season?

Darren Dreger: Well, perhaps in preparation for the bigger meeting with the NHLPA, the NHL continues to work on as many as six playing scenarios for the 2020-21 season, and that includes a Canadian division and what that might look like. It could be just one city, one hub, that houses all seven Canadian teams, but there are some big concerns over what happens if you start that way and then the world gets healthier and you have to flip back to normal divisional play inside a regular season. Logistically that could be a nightmare. You could see two hubs in the U.S. if the Canadian restrictions don’t soften moving forward but this is all a day by day process and nothing is finalized.

Nothing at all on Olympics since CBA agreement

LeBrun: In the meantime, a pretty significant part of that summer CBA announcement that the NHLPA had fought hard for was, of course, the return of Olympic participation after missing out on the 2018 Winter Games. Here’s the thing, though, there haven’t been any conversations between the NHL and NHLPA ever since that new CBA was announced with the Olympic news in it. We get it, there was a summer tournament to put on (Return To Play), and now they’re trying to figure out 2020-21. There are bigger fish to fry but the February 2022 Games aren’t that far away. At some point over the next 12 months the IIHF, IOC, NHL, NHLPA have to figure out if this is a go. They want to go, it’s in the CBA, but they have to make it happen.