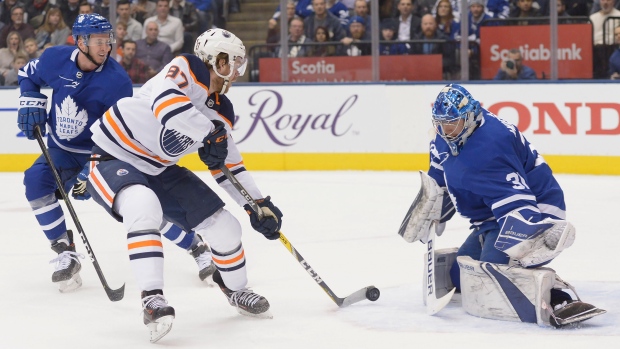 Bob McKenzie joins Gino Reda to explain what's holding up the hub city announcement, why there's potential that both hub cities could be in Canada and how all of this is affecting the Return to Play timeline.

Gino Reda: We’re not surprised the NHL is taking its time in announcing the hub cities because it is critical to make sure we can begin play again and then continue to play until we crown a Stanley Cup champion. But it’s not just choosing the right hub cities, but it’s something else that is delaying this process as well.

Bob McKenzie: Right now the National Hockey League and National Hockey League Players’ Association do not look as though they are going to announce the identity of the hub cities until they have the entire Return-to-Play protocol and a new CBA all agreed to, at least pending player approval. So Phase 3 training camp, Phase 4 Return-to-Play protocols to the hub, as well as a new CBA, all of that has to be concluded before the NHL and NHLPA will identify what the other hub cities are. Now, the other development on the hub front is that there is a real possibility that it can be all-Canadian hubs. That is Toronto and Edmonton. That could be the proverbial jinx for one of those two places, because every time that we’ve tried to come up with what we think are the frontrunners…We thought it was (Las) Vegas and Vancouver, and then Vancouver was out. It was Vegas and Toronto and then Vegas seemed to be out. So I don’t know if saying Edmonton and Toronto are the frontrunners will jinx them. But right now, and admittedly it’s a very fluid situation, minute-to-minute and hour-to-hour that that is the case.

Reda: So with all of this going on, do you have any sense of a timeline whatsoever about a return to play?

McKenzie: I can tell you this. Time is of the essence for both sides. For the first time in this process, I’ve heard from both people from the NHL and NHLPA say ‘we are running out of time’. This is a critical moment that has to happen. I expect there’s going to be critical negotiations between the NHL and NHLPA all Canada-Day eve right into the wee hours tonight to try and get something done. They’re trying to get Phase 3 done, Phase 4 and the Return-To-Play protocols, as well as the entire CBA. The CBA is necessary for both sides to understand the economic conditions by which these players and owners are going to live the next two-to-five years. Five or six years, really. So that has to be sorted out. As for the CBA itself, I mean, there are some nice things in there if they can get this thing put to bed. An international hockey calendar that would pave the way for NHL players to participate in the 2022 Olympics in Beijing. So, lots of work can be done. There could, hopefully, be a membership vote by the NHLPA before the end of the week if all goes well. And that membership vote would be on the whole enchilada. Phase 3, Phase 4, the CBA. We’re either playing hockey or we’re not. But we should find out here in the next week, if not sooner.