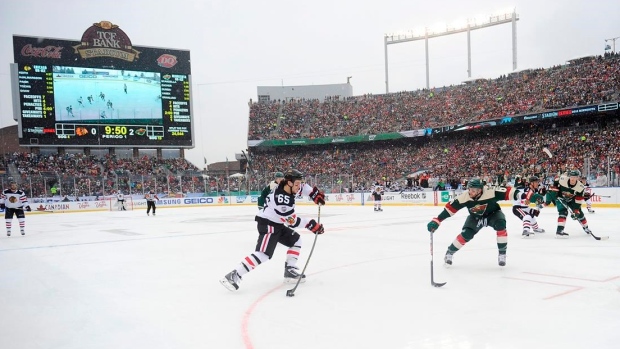 Why have Alexis Lafreniere and Jack Hughes been denied the chance to play in the World Juniors by their respective clubs? Could there be a number of outdoor games with fans when the season starts? TSN Hockey Insiders Darren Dreger, Pierre LeBrun and Frank Seravalli discuss this and more.

Will first overall pick and defending MVP at the World Juniors Alexis Lafrenière be freed up to play for Canada this Christmas?

Darren Dreger: The New York Rangers made the decision that they will not be releasing Alexis Lafrenière, the first overall pick in the 2020 Draft, to Team Canada and the World Junior Championship. They want him to continue to train in the New York area as we reported on Tuesday. He's been doing that, staying with family members since the beginning of November. They want him entirely focused on his first NHL camp. Similar thinking by Tom Fitzgerald, the general manager of the New Jersey Devils, with Jack Hughes. USA Hockey has inquired. With the delays between the NHL and NHLPA, Team USA wondering if Jack Hughes can take another run at the World Junior Championship, but Fitzgerald wants Jack Hughes absolutely dialed in on his second NHL camp. A bit more of loose scenario with the Toronto Maple Leafs and Nick Robertson. So Team USA could get a boost from Nick Robertson, but it's all dependent on what's happening with the National Hockey League. If the NHL is up and running, Robertson stays in Toronto. If it's not, then he will go to Edmonton by the middle of this month.

A full season without any fans in the stands would be crushing to league revenues. But, some fans are trying to be creative on how to bring in fans safely?

Pierre LeBrun: Creative is a good way to put it, Gino. Believe it or not, but I'm just passing this along. The Pittsburgh Penguins for example have informed the league that they would be ready to start the opening month of the regular season in outdoor games. The Boston Bruins looking to play multiple games at Fenway Park if it's feasible and if local health authorities are OK with it. We also have the Carolina Hurricanes who might want to have a game or two by their own refrigeration system. The LA Kings have the MLS stadium in California later in the season if health authorities allow it, but would like to play a whole bunch of games, and there's other teams as well that have told the league we'd like to play outdoor games. Why? Because with the fans physically distanced, obviously you can get some gate revenue. That's what this is all about. The NHL has not officially responded. I think right now they see the pros and the cons to it. By the way, none of the seven Canadian teams at this point, I believe, think it's feasible or of interest to them. So we'll see where this goes.

Frank Seravalli: The key to having these games being played safely, will be testing. And the big difference between next season and finishing off last year in the hubs, is that teams are responsible for securing their own testing for players and staff members. Let's just say there's been a lot of shopping going on for NHL teams when it comes to testing because it's both expensive and they're trying to find the most efficient way to get their test results. In talking to a number of teams today, I'm told the average price that teams are paying for COVID-19 tests are somewhere between $125 to $150 USD per test. That adds up, for a 50-member travelling party, that's $6,000 to $7,000 a day. If you're multiplying that by seven days a week, you can see $45,000 a week is a lot of money. In addition to that not every team is as lucky as the Carolina Hurricanes have been with their testing site getting their results just an hour up the road. Some teams, especially Western Canadian teams, have had to fly their test results across the country to Canada in order to get those in 24 hours. No one wants to skimp on the testing. They all recognize how important this is in the process, but still something teams are keeping an eye on.

We still don't know when the NHL season will start or when camps will open up, but are players starting to gather in their team cities to be ready just in case?

Dreger: Yes. I would say more or less, but it depends on what team we're talking about here. An interesting group of players gathered in Arizona. Auston Matthews, of course, put together a skate there. Connor McDavid participated. Other NHLers said to include the likes of Anthony Duclair and Matt Dumba. At times there were 10, maybe 15 players of NHL calibre, AHL calibre on the ice at one time. Connor McDavid has since returned to Canada this week, but players are doing whatever they can do to stay in shape when the dates come in from the NHL.