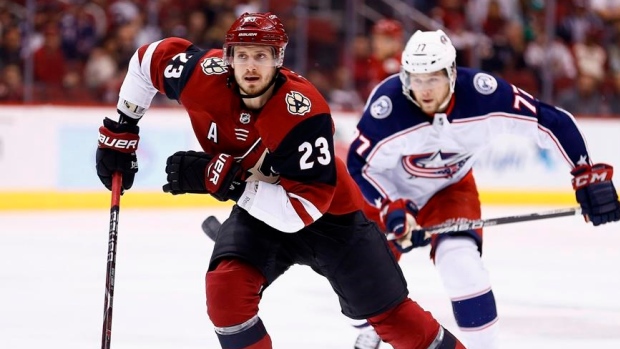 With the focus shifting to the off-season, the TSN Hockey Insiders have the latest on the New York Rangers' expected buyout of Henrik Lundqvist, the Edmonton Oilers' interest in Oliver Ekman-Larsson, and more.

Dreger: It really is. And unfortunately for Lundqvist, there will be a separation from the Rangers by form of that buyout. It’s an easy story to follow. Unfortunately for the Rangers, they made it clear that they would not go with the three-goalie system and Lundqvist, at 38-years-old, as decorated a goaltender as he is with the organization, the time has come for the two sides to separate. I believe the Rangers, perhaps as early as Wednesday, will announce that they have moved forward with the buyout of the final year of Lundqvist’s contract. And this decision would not come easy to the Rangers. Given everything Lundqvist has provided the Rangers as an organization, this was a tough decision but a decision that has to be made moving forward.

The Oilers are looking to fill some needs. Are they looking at Oliver Ekman-Larsson from the Arizona Coyotes?

Dreger: They’ve inquired (about him), certainly. There have been discussions on Ekman-Larsson but go to CapFriendly.com and you can see this is a big ticket and a long term coming back the other way. There has been significant trade interest expressed in the Coyotes captain and the Oilers are among the teams with some interest. It’s in the preliminary phases and, again, given the cap hit that Ekman-Larsson brings back, this is not going to be an easy transaction for Ken Holland and the Oilers.

I would put Boston in that group of teams with interest as well. But also keep in mind Ekman-Larsson has trade protection so he is, to some degree, going to manage this process.

LeBrun: In the meantime, the Oilers of course have to figure out their goaltending as well. We’ve reported before they spoke to Pittsburgh about Matt Murray. We believe they’ve shown interest in Darcy Kuemper in Arizona. I can also tell you that they’ve shown interest in Petr Mrazek of the Carolina Hurricanes. I think in Mrazek’s case, a goalie that Holland knows well from his days in Detroit, that would be more of a Plan B. If they can’t upgrade in a more serious fashion, perhaps they could circle back to Carolina at some point and end up with Mrazek. Keep in mind as well I think the Oilers are keeping a close eye on what’s happening with Jacob Markstrom and his negotiations with the Vancouver Canucks.

Jake Virtanen is a restricted free agent with arbitration rights. With an impending raise, is it looking more likely the Canucks will move their hometown winger?

Dreger: They may not have a choice. General manager Jim Benning obviously has to listen and he’s looking at every option possible. Virtanen is a valuable piece in the Canucks organization, and they would love to keep him but it doesn’t take a mathematician to look at the numbers in Vancouver [to] realize all the work that Benning has to do. There is a lot of trade interest in Virtanen and when you look around at some of the other players with a similar age who have developed on a similar path, and produced similar numbers, you’re looking at Virtanen somewhere in a two-year contract at around $3 million. No doubt the Canucks would like to keep him, but they’re also intrigued by the interest.

Less than 24 hours after the Tampa Bay Lightning hoisted the Stanley Cup, GM Julien BriseBois has some important decisions to make on key players that helped the team.

LeBrun: BriseBois did not get a day off unlike a lot of his players after the Stanley Cup. Talking to people around the league, BriseBois is already on the phone. He has to shed about $10 million of cap space here over the next few weeks and it’s not going to be easy. Certainly there are some players you look at that are obvious targets: Tyler Johnson, who has four years left at $5 million per season, and Yanni Gourde, who has five years left at north of $5 million a year. The problem is both those players have full no trade clauses so if they don’t want to go anywhere, they won’t. So this is going to be delicate by BriseBois. One thing I was told by a source today, the Lightning could surprise us here. It may not necessarily be the player that you think that ends up getting moved.

They have got to move cap space. Restricted free agents Mikhail Sergachev and Anthony Cirelli could be targets of an offer sheet, they have to get those guys signed.