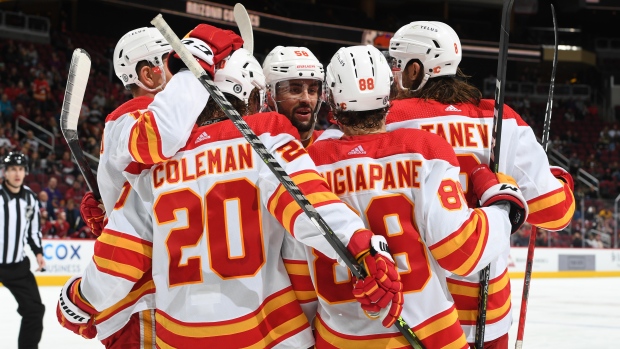 The TSN Hockey Insiders discuss the Flames' interest in adding secondary scoring heading into the trade deadline, why Mack Guzda's signing has fuelled trade speculation in Florida, Jack Eichel taking a step closer to returning and making his debut with the Golden Knights, and more.

Pierre LeBrun: Obviously a lot of time, six weeks still between now and the trade deadline, but I had the chance to speak with Flames GM Brad Treliving for a piece I’ll be writing in The Athletic on Wednesday.  I can give you a little sneak peak which is this, if there is an area that he is looking at right now it’s secondary scoring, perhaps a dip into that trade market. Now, he does think that some of that secondary scoring can come from improvement from within.  In fact he pointed out that Blake Coleman, before the break, was starting to come on offensively, but yes, if there is a trade to come that’s probably where they’re going to look.  And this is me, not him, I think he’s got natural trade partners in teams like the Montreal Canadiens and Ottawa Senators in terms of looking at the forward market and in general, it’s interesting to me that a lot of the top playoff contenders are looking at defence, which might give the Flames a bit of an edge in terms of going through the forward market.

Sometimes in the trade market, we wait for the first domino to fall and then a number of other things occur on its heels.  Could we see that happen as a result of the signing of an undrafted goaltender out of  Major Junior?

Darren Dreger:  We’re talking about Mack Guzda with the Barrie Colts and signed this weekend with the Florida Panthers. Granted it’s a twitchy time of year, you come out of post All-Star and the talk among NHL general managers ramps up, but so does the speculation.  You’re right, when Florida announced they had signed Mack Guzda, he’s a top, undrafted goaltender in Major Junior hockey, well the juices start flowing a little bit, because they already have a top, young goaltender in Spencer Knight.  There are some around the National Hockey League who wanted to connect Bill Zito and the Florida Panthers with on-going interest in Jake Chychrun and the Arizona Coyotes and perhaps Florida would use one of these top, young goalies as part of the bait.  It’s not about that unfortunately, it’s more about the Florida Panthers just stockpiling in a department, in an area they know is going to serve them well in the future.

Big news on Monday when Jack Eichel was spotting skating with the Vegas Golden Knights, not wearing a non-contact jersey, so he was in full practice.  What are you expecting for a timeline?

LeBrun: It got a lot of people excited, does that mean that he’s playing in a couple of days? That’s not the case.  Listen, Vegas has been very careful not to give a specific timeline for Jack Eichel’s return, in part because they don’t know themselves, because he’s coming back from, as we know, a very unique surgery.  Dregs has talked about it many times this year, they are being careful.  This was the next step all along, coming out of All-Star, put on the contact jersey and then see how he reacts.  He could be back within the next couple of weeks, according to a source that I talked to on this day, but then of course if that’s the case, there is some cap ramifications as we know with Vegas needing to make room for Jack Eichel with a trade or two, so keep an eye on that.

In the next month or so, the U.S. college hockey seasons are going to begin to wind down and as they do, the rumours ramp up about guys who are ready to leave college and hit the NHL.  What are you hearing?

Dreger: I’m all about the college free agents and there is a handful of them, including Corey Andonovski, a young player from Uxbridge, Ont., 22 years of age, he is a star winger with the Princeton Tigers.  Now, Princeton isn’t expected to go beyond the season, so their season is going to end in February.  A lot of NHL clubs have heavily scouted Andonovski, not just this season, but in past years as well.  Seven goals, 10 assists in the 20 games that the Tigers have played to this point and if he signs with an NHL club, which is expected, he could make that jump at the end of the season, so that’s in the next couple, three weeks.

A couple of weeks ago we were talking about the Anaheim Ducks general manager hunt that they were looking into the past to fill some other voids once they named their GM.  The GM has been named and now are we starting to see some of that happen?

LeBrun:  The return of Scott Niedermayer in a more official capacity, special advisor to hockey operations. I chatted with Niedermayer today; listen, he’s not coming back in a full-time role, but certainly in an increased role from what he’s been doing the last few years, he was really merely scouting.  He’s still going to live in B.C., but he’s going to travel more to Anaheim and part of the process here is that Scott Niedermayer and Pat Verbeek really hit it off during the GM interview process, they see the game the same way, Pat Verbeek was comfortable with this move and here we go, Niedermayer is back.

The clock continues to tick down, we are now under six weeks to the NHL trade deadline.