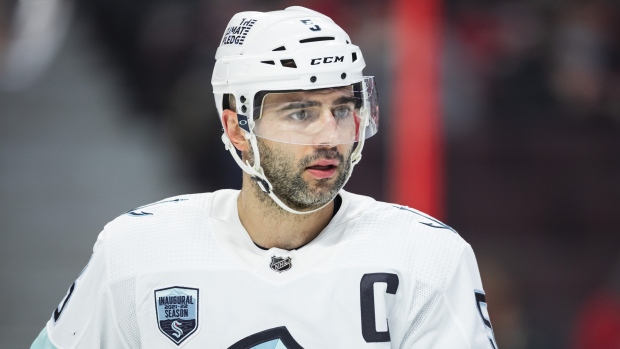 With the Trade Deadline fast approaching and a few D-men off the market, have the Maple Leafs narrowed their focus down to a few targets? Claude Giroux is slated to play his 1000th game for the Philadelphia Flyers on Thursday, how soon after that could he be traded? TSN Hockey Insiders Darren Dreger, Pierre LeBrun and Chris Johnston join host Glenn Schiiler to discuss these topics and more.

A lot of people are wondering what Kyle Dubas will be able to pull off prior to Monday and with a couple defenceman now off the market, has Toronto narrowed its focus in terms of a defenceman?

Chris Johnston: The market has certainly started to take shape and we know that Mark Giordano is one of the targets that the Maple Leafs have on their list at this point in time and I’d say that what’s interesting about this situation is a couple things. Kyle Dubas and Ron Francis – the GM for the Seattle Kraken – have a Sault Ste. Marie connection that they go way back together, but what they don’t have is a shared vision of what this trade should look like. Namely, the Kraken would like to get a first-round pick back in any trade for Mark Giordano. That is expressly what Kyle Dubas has told teams he doesn’t want to do – he’s not going to trade his first-rounder, he’s told teams in a deal for a rental. So that’s where that one is hanging up right now. Similarly, Jacob Middleton in San Jose, as Pierre reported on Tuesday, (is) another person of interest for the Maple Leafs, but the Leafs don’t like the price for him just yet either.

Darren Dreger: Looking at the Ottawa Senators, sources tell us that the Senators made another offer to extend Nick Paul. They topped up the money a little bit. It’s believed they are still working around a four-year term and the fact is that the term may ultimately be the undoing for the Ottawa Senators in their quest to extend an important piece. Nick Paul is an important piece of the Ottawa Senators, so it’s believed unless something changes between Ottawa and the Nick Paul camp that he will go to unrestricted free agency. So then obviously that begs the question as to what does Pierre Dorion and the Ottawa Senators do with Nick Paul as a trade asset between now and Monday. The belief is that if they cannot close that gap in negotiation, Paul will very likely be traded before or at the deadline on Monday.

Claude Giroux playing in his 1000th NHL game on Thursday – that’s quite the milestone to achieve and then maybe hours later get traded, but that’s what many are expecting to happen. What’s the latest on Claude Giroux?

Pierre LeBrun: Well obviously playing in that game was very important to Claude Giroux and I think there came a point in this process a few days ago where the Flyers knew they aren’t going to trade him with all the pomp and circumstance before that game. As of Friday morning, I think things will start to escalate. Again, the two teams that continue to show interest – the Florida Panthers and the Colorado Avalanche – is there a third mystery team? I cannot pinpoint one. It doesn’t mean that there isn’t one.  The Florida Panthers, I would categorize them as all in on Claude Giroux. In fact, my understanding is there was another conversation between the Panthers and Flyers on Thursday before that game, so we’ll see where this goes. Owen Tippett could be part of an offer for the Florida Panthers going the other way to Philadelphia, but I think the Avalanche are going to put their best foot forward as well. They’ve managed their cap very well so that they can take a run at him as well. It’s going to come down to what Claude Giroux wants and I don’t think we’ll know that until starting on Friday.

Elsewhere, the Boston Bruins are not considered elite Cup contenders by many, but do you still expect them to be active leading into Monday?

LeBrun: They have been active, it just hasn’t shown results yet. They showed interest in Josh Manson who got traded to Colorado. They showed interest in Ben Chiarot who got traded to Florida. They really want a top-four D, specifically on the left side. Our understanding, the Bruins have shown interest in Jakob Chychrun all along, but it’s not clear at this point now whether the Arizona Coyotes feel this is the best time to trade Jakob Chychrun based on the offers they have got. They could wait for the summer, or is that a way to tell Boston and L.A. and other teams (to) put your best foot forward. In the meantime, Hampus Lindholm, I’m told by a source close to him that there has been no progress in talks on an extension.  He could be a fit both in a place like Boston or a place like St. Louis. It would be high-priced to get Hampus Lindholm out of Anaheim.

The Vegas Golden Knights have never missed the playoffs. That’s a four-year streak. They’re on the bubble right now, 20 games to go, (is there) some positive news on Robin Lehner?

Dreger: Well, depending on which way you look at it. From a club perspective, no doubt about that, but there is speculation out of Vegas (that) Robin Lehner’s season may in fact be in jeopardy because of injury. But I can tell you the Vegas Golden Knights strongly suggest that is not the case and that they do not believe that his injury will keep him out long-term. We do know that the Vegas Golden Knights are clearly in a dog fight in that Western Conference to lock down a playoff spot. Nothing about this season has gone smoothly, so why do we expect it to be otherwise between now and Monday’s deadline?

In a salary cap world, sometimes it takes more than two to tango. Are we expecting to see more deals where teams are getting involved just to take on salary?

Johnston: Absolutely. This season is even different. It’s the third straight season with a flat cap and the three trades we’ve seen this week all include salary retention in them. So the third party brokers, the teams that have a player traded through them to make some of those higher cap hits, are going to be even more valuable at this deadline. Arizona has let it be known to other teams, they’re willing to do that. The Coyotes have already got a lot of interest from teams willing to look at that. Look at Buffalo, San Jose, Seattle as some other options, but those teams can pick up an asset and help make some of these trades go.