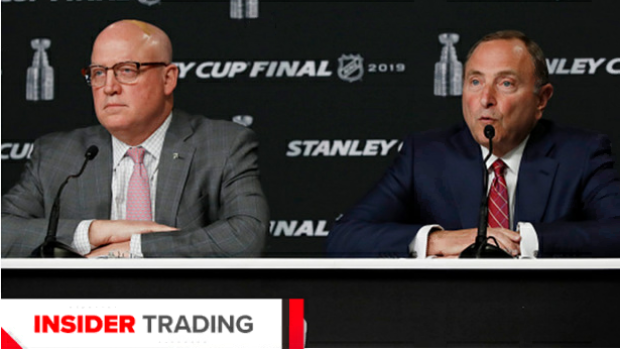 We have seen players traded from American to Canadian teams where they were required to spend 14 days in quarantine before they could join their new club. As the deadline approaches, is the NHL working on a way to change or minimize the amount of quarantine time needed? TSN Hockey Insiders Pierre LeBrun, Darren Dreger and Frank Seravalli discuss this and more.

James Duthie: We’ve watched players like Pierre-Luc Dubois and Ryan Dzingel get traded to Canadian teams and then disappear for two weeks, for the mandatory 14-day quarantine when you re-enter Canada. As we’re one month away from TradeCentre, is the NHL trying to do something to get rid of this, or at least minimize this?

Frank Seravalli: They are certainly trying, in fact, the NHL and all seven Canadian teams have been trying for the last number of months to get an exemption to that quarantine. With a month to go before the deadline, they are optimistic that it remains a possibility at this point. They’re hoping to find out ASAP, but certainly well before the deadline. What teams have been willing to do on the U.S. side to avoid some of that quarantine when changing teams with players driving 16 hours between cities, or one team dropping a player off at another team’s hotel in order to keep these bubbles intact. That would be welcomed news to some GMs that are trying to make some moves and to do it without the quarantine of 14 days would be music to their ears.

Duthie: Not sure it would be to a Canadian team, but Eric Staal  in Buffalo, his name is coming up a lot, is there a chance that he ends up back in Carolina?

Pierre LeBrun: There is a chance, and the Caronia Hurricanes this past week have discussed the possibility of this. I wouldn't say it’s a top-of-the-agenda item, but what I’m told is the Hurricanes have talked about, “Hey, if Eric Staal is still on the Buffalo roster, closer to April 12, maybe we give the Sabres a call and see what it would take to bring him back here to Carolina.” It’s a storyline that I think a lot of people can get behind. But, in the meantime, there could be a Canadian team or two that makes a push for Eric Staal before that. And that would put Kevyn Adams and the Buffalo Sabres in a position; do you take your best deal a couple weeks out, or do you think it gets better with Carolina closer to April 12th.

Darren Dreger: Another story that is developing in Buffalo is the health of their captain, Jack Eichel. Eichel is in quarantine right now, it’s his right and he sought a second opinion out of state, so that means he has to quarantine before rejoining the Sabres in seven days. He was seeing a specialist so the information hasn't been returned yet from that doctor to the diagnosis or prognosis of the Eichel injury. The Sabres just don’t seem overly concerned, but it’s wait and see for the moment.

Duthie: The all-Canadian division has gotten mostly rave reviews, and it’s led to talk of maybe this could be continued, is that a pipedream?

LeBrun: Yeah, NHL commissioner Gary Bettman had a media availability on Thursday and I asked him point-blank about divisional alignment, after this year. And he said more than likely the NHL will be going back to the divisions from before this year, that this was a one-off this season. He went on to say that maybe in going back to the old divisions that there will be more divisional games. He said divisional games, not all-Canadian games. So, I know there are some Canadian-team governors and executives that at least hope after all of this there will be more all-Canadian games but that’s not what Gary Bettman said on this day.

Duthie: A full year after the OHL had to shut down their season, are they finally close to playing again?

Dreger: The Ontario Hockey League is hopeful that they are going to receive the approval to return to play from the Ontario provincial government, at some point in the next few days. That is the expectation, that is the hope. They have their return to play all planned out and it will be four hubs, five teams in each hub. No clear idea as to how many games they will be able to play, because they don’t know when they can start. They have a playoff format figured out, but they don’t know if they will have a championship at the end of it, again this is all under the jurisdiction of Ontario health.