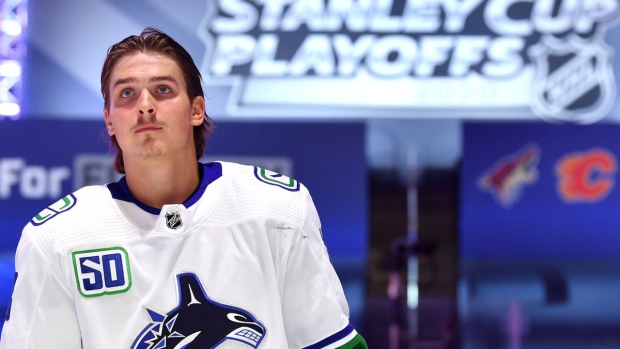 The TSN Hockey Insiders discuss the latest trade interest in Jake Virtanen, the chances of the Predators being sellers before the trade deadline, the preliminary talks underway between the NHL and IIHF regarding the 2022 OIympics, and the deadline teams are facing to submit their building dates for next season.

Let’s begin in Vancouver where the Jake Virtanen watch continues. Just one goal in 14 games for the winger from Abbotsford, B.C. We’ve heard his name out there for a while. Any news on that front?

Darren Dreger: Adam Gaudette as well with the Vancouver Canucks. We’re approaching the 15-game mark, for the most part, of the regular season schedule. A few teams have played more than that, but there is interest in Jake Virtanen. It’s interesting, teams are playing close attention to his time on ice. Now, Monday night against the Calgary Flames he was limited to just under seven minutes of ice time, so that caught the attention of some clubs who have expressed some interest. Keep in mind though that Jake Virtanen has another year left on his deal at $2.55 million and why that is important is because of that flat salary cap of $81.5 million, but it’s also important to the Vancouver Canucks for a cap perspective and a cash standpoint. There has to be the right financial fit for the Vancouver Canucks to make this deal happen. Now Vancouver also wants a young forward in return, so we’ll keep this one on the watch list.

The Nashville Predators are starting to lose sight of the playoff teams. Could we see them become sellers?

Pierre LeBrun: Yeah, I think that’s where this is headed. I don’t know that the Predators have outright decided that they are sellers, but they’re right on the brink. And there’s some obvious names… Mikael Granlund, Erik Haula, they’ve signed one-year deals and will be UFAs at the end of the year. Those will be your pure rentals, but there’s a more intriguing name when I talk to teams around the league that they hope will be on the market and I think there’s an absolute solid chance that the Predators at least listen is top four defenceman Mattias Ekholm who has been a long-standing member of that organization. He’s got a year and half left on his contract at a real bargain price of $3.75 million. He does not have any no-trade protection and again this would really be about the Predators perhaps seeing what’s out there and if they don’t like it, then keeping him. Think of the Jake Muzzin deal from a couple years ago where he had a couple years where he had a year and half left on his deal. Alec Martinez last year, he had a year left. That top four D that has a couple playoff runs in him can be appealing to a contender. That would be an intriguing name.

The Winter Olympics are just over a year away. We know the NHL and NHLPA are on the same page when it comes to wanting to be there, but where are we in talks with the IIHF?

Dreger: Well, they are having preliminary discussions so let’s use this as our friendly monthly reminder of the ongoing dialogue and the due diligence that is being done between the National Hockey League and the Players’ Association. Rene Fasel of the IIHF recently engaged in conversations with those two groups as well. It’s all in the logistical stuff as we have talked about in the past. You’re talking about the marketing rights, you’re talking about travel, you’re talking about the insurance issues. Again, all of the logistics. At some point in the not-too-distant future, the NHL and the Players’ Association, the IIHF are going to have to get into the heavy lifting so they can reach an agreement on a contract with the IOC, but they aren’t quite there yet.

Is the league already looking ahead to next year’s schedule?

LeBrun: Well, yeah, because they have to. Normally, pre pandemic in a normal world, they would have asked clubs for their building dates availability in October and gotten those dates by early November. That hasn’t happened yet. The deadline is this Friday for NHL teams to submit their building dates. There’s an obvious delay because of the pandemic and because of all the uncertainty as to why this process hasn’t got started yet. But time is of the essence. You see concerts being rebooked around North America in a lot of arenas, the NBA is going to do their thing, so the NHL has to get on this and it’s why the ask went out about three weeks ago for teams to submit their building dates. They want to start next October as per usual for the 2021-22 season. They got less time to put together the schedule.